The Evolution of The Champion City Fire

Let's begin with the title. I began working on the comic book during the end of 2003 and all of my ideas were kept in a notebook. The working title was The Champion City Fire but the original plot is much different than the first issue. The story takes place in the fictional town of New Ravenwood, Ohio, which is a mythological town that is known as 'The Champion City' due to a reputation of producing stellar athletes.

The fire portion of the title will remain a secret for now because I do not want to give away anything concerning the plot, but stick with us, folks.

When I began working on the comic book with Joseph Haemmerle, we waited until we had the first five pages completed before we collaborated on the cover. I presented Joseph (let's call him Joe from now on) with an idea for the cover, which is featured below. 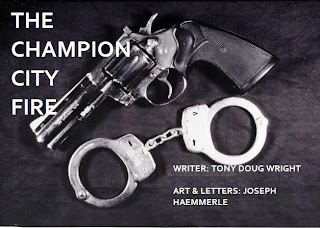 Joe thought the concept was good but he said that he'd work on the cover and he created a fantastic cover for The Champion City Fire. 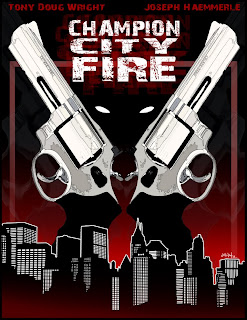