THE HISTORY:
Champion City Comics, founded by TonyDoug Wright in October of 2009, is a webcomics community fueled by a do-it-yourself philosophy. It has been our goal to provide excellent webcomics to a worldwide community while supporting and developing up-and-coming writers and artists. Currently, we have nine titles that cover various genres from science-fiction to crime noir to teen humor. Our dedicated staff of writers and artists hail from the United States, Argentina, Canada, Brazil, and Italy.


Our webcomics are updated every Wednesday, but every day we feature a hilarious comic strip, Comics From The Edge. We thank you for supporting Champion City Comics.


TONYDOUG WRIGHT: TonyDoug is a lost soul of rock and roll, a proud father, archivist, instructor of history, and a guy that is married to the coolest girl on the planet. TonyDoug Wright is the writer for the following titles, The Champion City Fire, The End of Paradise, Westwood, Day 165, Phoebe and Eddie, Doctor Death vs The Zombie, Naira, and Naira 2. Contact: tonydoug25@msn.com 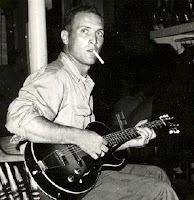 A. KAVIRAJ: Kav is an artist, teacher, and biologist who lives in Sacramento, California. He is the artist for The End of Paradise, Rapid City,Tales From The Future, and Dr Death vs The Zombie. He is the writer and artist for Dr. Death vs. The Vampire. E-mail: ddkaviraj@aol.com

VICTOR POZZI: Victor is an Argentine artist, an engineer, is married, has two children, and has participated in several workshops in drawing with Ariel Olivetti and Jorge Lucas. Victor is the artist for Westwood, Naira, Naira 2, The Captive, and The Hell Fighters.Contact: ingpozzi@yahoo.com.ar

BOB TOBEN: Bob Toben is an incredibly mysterious individual-even more mysterious than the enigmatic Fred Hull. Not much is known about him, even by himself. His past is shrouded in mystery, but he does send submissions at odd unpredictable intervals. His stated goal is to be the most unknown man in comics. He has asked us to withold his email address, and we have to respect that. 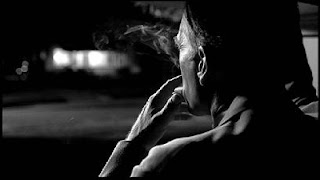 GIOVANNI BALLATI: Giovanni is Italian artist and writer with an impressive artistic resume that includes Language of the Etruscan Gods, Don Peppe Diana and ,Il Micco e il Forziere di Gaidoald. Giovanni is the artist for Day 165. He is also the writer and artist for Gheldo. 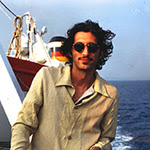 JOSH DAHL:  By day, Josh Dahl teaches English at a juvenile detention center in Boston, but by night (and by weekend) he writes the semi-autobiographical superhero comic book Rapid City. He lives with his girlfriend and his dog, and takes superheroes very seriously. 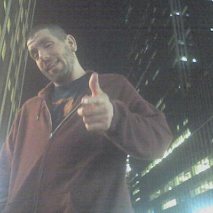 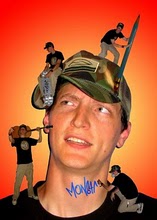 ERIK ROMAN: Erik Roman is an illustrator and cartoonist living in the wilds of Southwest Michigan with his wife, daughter and Betta. Erik discovered comic books on a spinner rack at a grocery store at the ripe young age of 7 and has been drawing superheroes, science fiction and fantasy trying to recreate the wonder and feeling of awe he had when he first opened and read that old issue of Iron Man. Erik works primarily with traditional media such as graphite, charcoal and ink and only uses digital programs such as Photoshop for cleaning up images. A primarily self taught illustrator, Erik's work has appeared in comic books, role playing game books, websites, magazines and newspapers since 2002.

MAGNUS: (Martín A. Pérez) is a Uruguayan writer and letterer. For CCC he letters Dr. Death vs The Zombie, Rapid City, and Tales From The Future. On his own, he's a member of GAS Comics in his country, through which he publishes several comics (mostly in Spanish), as well as penning and lettering stories here and there for other publications. Every Friday; he publishes his webstrip My Life Without A Jetpack, a humorous look at his own life. 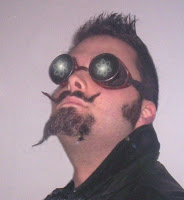 KURT PETERSON: Kurt is the writer and artist of Escape, a sci-fi short story featured in Tales From The Future. 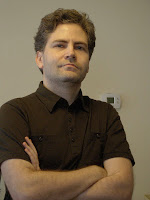 CHRISTOPHER SMITH: Christopher Smith was born in London, Ontario to American parents in September of 1979. Married in 2002, children came along shortly thereafter and killed all of his expensive hobbies - though he did manage to support his avid paintball habit for a few years by writing for a nationally distributed paintball magazine. When the paintball writing came to an end, he discovered a love of writing as a hobby, specifically supernatural and fantasy fiction. With a few indie-published short stories as well as a queue of shorts and novels in various stages of editing, writing has filled any void he might have in his free time. 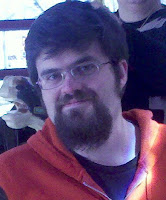 BRIAN CEE: Brian Cee writes away his ever-loving days in the Blue Ridge Mountains of Virginia. When not writing, the self-described “redneck Grant Morrison” plunks on his bass, raises a daughter, jaws with his wife or lollygags in the world outside his backdoor. Works-in-progress include PLASTIC and Zombielicious, both with artist Josh Ginter. 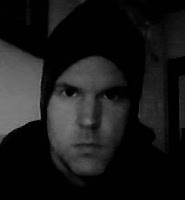 MICHAEL KNOLL: Michael Knoll is from Frankfort, Indiana and currently is a student at Ball State University. 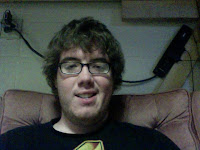 BRET KINSEY: Bret is a comic book reader and the author of The Burning Blade, a fantasy comic book set in the Dungeons and Dragons mythos. In his off time, Bret enjoys spending time with his family, reading, and playing guitar. Currently, Bret resides in Muncie, Indiana and works as a heavy truck operator. His favorite comics are Superman, The Walking Dead, Invincible, and The Green Lantern. Contact: bkinsey1978@gmail.com 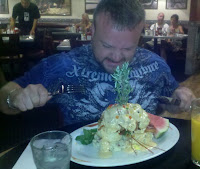 MICHAEL NEWTON: Hey CCC readers, it is time that I let you know a little about myself. My name’s Michael Newton, and I’m an artist and a writer (more artist than writer, I assure you). I’m a sophomore at Ball State University and I’m studying to be an art teacher (but I’d like to be a comic artist). I read more comics than I should, then I try to write reviews on them for Champion City. If you couldn’t tell, I go to school with Mike Knoll, and we sometimes reference each other in our reviews, so I’m sure he’ll say my art sucks every chance he gets. 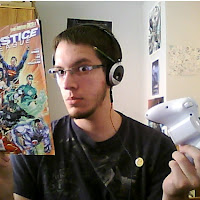 MATT LOUDEN: Matthew Louden spent ten years as an undiscovered rock'n'roll icon before deciding to pack up his gear and giving writing comics a shot.  He is married with two (soon to be three) children and lives in Indianapolis, Indiana.  Matthew is the writer for Cuddle-Puff: Destroyer of the Damned.  He can be seen below making his "writing face." Or he may be thinking about ice cream. 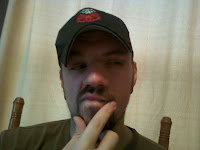 FRED HULL: Fred Hull is an enigmatic figure with several comic artists in his family tree, so it's in his blood. He is best described as "that guy the hero goes to in the movies to get information or some type of new weapon or something. He is never at a loss for this and that is why he is so valued at Champion City Comics. Contact: fhull@cwnet.com 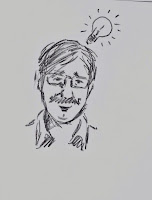 HUGH ORR:Hugh Orr received his BFA from Winthrop University in Graphic Design and Visual Communications. Currently runs a small design firm, ORRNOT LLC[orrnot.com], in Rock Hill, SC. Has a modest collection of comics (3,000) but loves the industry. Remembers the week Superman died. Loves GI Joe and Transformers a bit too much. Has seen every thing Star Trek ever. Sushi and Movie buff. Currently writing two screenplays, and working on Robert Atkins's website (of GI Joe fame).

JOE PRUITT: Joe is an artist and writer from Ohio. Joe has worked for various publishers and has a comic strip titled Brit & Ivy. Joe is the artist for Phoebe and Eddie.


TOM AGNETTI: Tom is an imaginative illustrator, painter, 3d artist and animator who is driven by an incredible passion for self-expression through art. Tom is accomplished in using traditional methods as well as digital and modern technique. His paintings have been featured in galleries and art shows across the state of Delaware. Tom's illustrations have also appeared in numerous books, games and magazines. Tom is responsible for the design of various characters used in animation, film, comic books and the creation of mascots. He is the artist and letterer for Cuddle-Puff: Destroyer of the Damned. 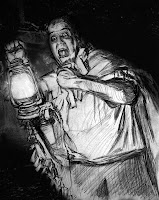