Writers and artists affiliated with Champion City Comics will be submitting articles concerning individuals in the comic book industry that have influenced their work. Today's submission is from A. Kaviraj, the artist for titles such as Dr. Death vs The Vampire and Dr. Death vs The Zombie.
Sean  Phillips gained popularity with Marvel Zombies, although he had been drawing several titles for years. He's a British all-in-one artist and his use of shadows is top notch. Unlike most comic book artists, who tend to overdraw, with everything looking shiny and super detailed, Sean has a fresh noir look to his rapidly drawn panels. He does not use a pencil, but prefers the use of a non photo blue felt pen to sketch out his panel. After that, he uses a pitt pen to outline, followed by some tremendous brushwork. When I asked him why he doesn't use a pencil, he stated that he 'got tired of all the eraser shavings'! Unlike some inkers who carefully fill in, Sean uses a brush like a fine artist, and the results are staggering.

Watch Sean at work here. His blog is very helpful for artists and you can purchase some of his original art. 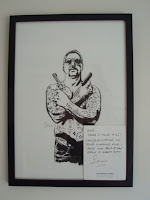 Be sure to keep an eye out for his son, Jake Phillips, who definitely will make a splash in the business one day.
- August 06, 2011