When I launched Champion City Comics during the fall of 2009, it was strictly for my comic book project. However, my one comic book project became three and then I decided to accept scripts from writers to see if they had an excellent story or two for the site. Reviewing scripts is not all fun and games because some writers lack the ability to create stories where characters have depth and the plot is well-structured or slightly interesting. And then there are the few that deliver an amazing story.

Lawrence Rider, a writer from England, contacted me back in June regarding a script he had in development. His story was titled Gaslight and it was a steampunk tale where a detective by the name of Solomon Cold investigates a series of abductions that are linked to a mad scientist known as the Pneumatist. His script was pretty solid and I did not have an artist available. But magic happens at Champion City because an artist, George Athanasiou, contacted me to see if he could be part of a webcomics project. His style was perfect for Gaslight so I teamed him up with Lawrence. In the upcoming months you will get to see the first four or five pages of this exciting tale. For now, enjoy some teaser artwork. 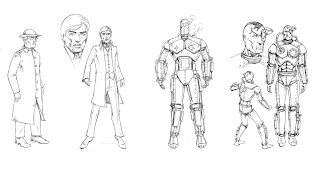