If you have ever wondered if there is a headquarters or a home city for Champion City Comics, then the unofficial answer is Portage, Michigan, which is located outside of Kalamazoo, Michigan. I'll talk more about the origin of Champion City Comics in future posts. I have been fortunate to work with two Kalamazoo area artists since our website launched in 2009, Josh Dahl and Erik Roman. Josh was the head writer for webcomic Rapid City and will be a frequent contributor for future articles. Erik will be the penciller for an upcoming pulp inspired webcomic series titled Red Devil.

Red Devil is an international crime fighter who takes on the world's most dangerous villains while accompanied by her teen sidekick, Kid Diablo. Red Devil will be an action-packed webcomic series that will pay homage to the classic pulp adventures and will be fun for the whole family. Currently, our plan is to launch the webcomic during the month of September 2011 and may feature daily updates.

TonyDoug Wright will join the creative team as the lead writer and Joe Haemmerle will be the letterer and colorist. Below is a little teaser of what you can expect in the upcoming months. 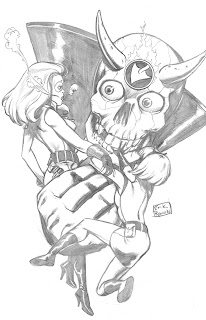