If you have not read the first part of this entry then check it out here. Kav and I are back to review pages four, five, and six of this comic book. Enjoy! 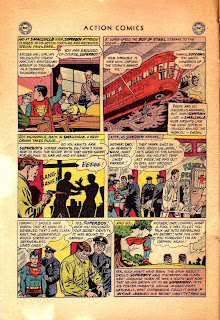 Kav: Why is Superboy still in school since everyone knows he's Clark? His supreme brain knows more than the teacher's puny one. Also, he doesn't leave a Superboy robot behind to protect his parents or give them super powers or a force field.
Tony: This may be the only time where we have a legitimate reason for not keeping a kid in school. DC decided to pull a Batman and have a gunman kill the Kent's. Don't worry folks, if they would have kept the storyline then they would have found a way to bring back the Kent's like the way they resurrect any character. Anyway, if Clark can see a dirigible in trouble then why was he not scanning his parent's house for trouble?
Page 5 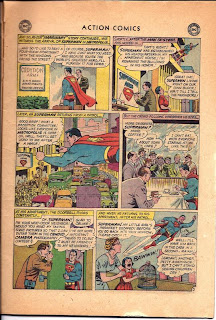 Kav: All Superman had to do was explain that he would be leaving if people bothered him, like I do, and his problems would be over.
Tony: We get the point, DC. Yes, it's hard to be famous, especially if you're Superman. Looks like how we found out how Lex Luthor found you in the first panel. Once Superman moves into my apartment building then that's the moment where I submit my notice to end my lease. Why does Superman need an apartment? They should have put him in a timeshare with Green Lantern and The Flash. Come on DC, superheroes have to live somewhere that's off the grid.
Page 6 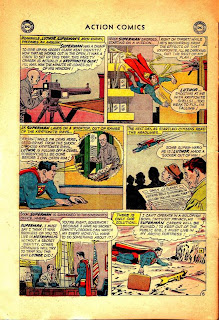 Kav: Luthor has seen Superman flying around plenty of times and never shot him down with a kryptonite gun, so why is it now so special?
Tony: The governor decides to kick out Superman because he's a nuisance to Metropolis? Good job, stupid. Let Luthor take over and have Brainiac as the chief of police. I love how the arrow at the North Pole points towards the Fortress of Solitude.Yes General Zod, this is where I'm hiding. Good grief.