Ladies and gentleman, this is the last entry for Action Comics #305 titled 'Why Superman Needs A Secret Identity'. However, due to the popularity of the Kav & Tony blog entries, this will be a weekly feature at Champion City Comics. Enjoy! 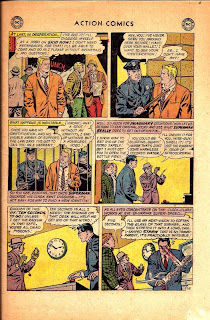 Kav: Why does he have to disguise himself as a hobo? He can get money and rent a nice hotel indefinitely. If Clark can do that ridiculous glass blowing then there are a billion easier ways to solve this problem. Also, if he did that glass blowing at supersonic speed then the sonic boom would have blown up the nitro. Oh I forgot, it wasn't even nitro. Then my first observation holds since TNT is not a contact explosive. Superman should have known this and he should have just walked up and bitch slapped the dude.
Tony: Do you watch infomercials? You know how they have a tendency to make the simplest tasks to be nearly impossible? "Oh my god, I can't organize a spice rack!" "Boiling water for spaghetti?! Inconceivable!" That's how I feel with this story. First, we have Clark in his Howard Hughes or Errol Flynn disguise deciding that life would be easier on skid row. Doesn't this guy know that the Justice League would help a brother out? He could crash at Wayne Manor and get a job with Barry Allen at the police department. Personally, it would have been cooler if he joined the band Skid Row. Clark and Sebastian Bach would belt out some I Remember You, "Remember yesterday, walking hand in hand. Love letters in the sand, I remember youuuuuuuuuuuuuuuuuuuuuu." I think Clark would add some "I love you, Lois!" moments during the song and get fired from the band. Rock and roll ain't easy, kids. I love how Clark is jailed for vagrancy. If he can move at supersonic speed to stop Benny the Blaster then why doesn't he just vanish in the blink of an eye when he's arrested. I know Clark's a do-gooder, but couldn't he have pulled some diplomatic immunity? He's NOT FROM EARTH! The laws don't apply to you, bro.
Page 14 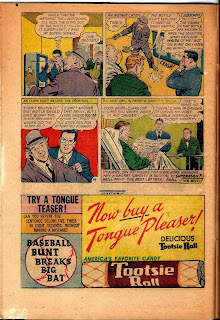 Kav: You go, Clark! In panel three, suddenly for the first time, Clark is a badass. WTF man?!
Tony: Superman can drink dangerous liquids?! On the previous page, he was worried that he could not find a job. Join the Jim Rose Circus, you freak! Again, I'm baffled by the inconsistencies in this story. On one page he can't get a fake ID while on another he's drinking some explosive liquid. Uh-oh, I see a Tootsie Roll advertisement. Do you know what that means? Click here and thank me later.
For those of you that enjoyed this series, we'll be back with another review from the Jimmy Olsen comic book.
- August 18, 2011