KAV & TONY BREAK IT DOWN: SUPERMAN & THE LEGION OF SUPER-CREATURES

The Golden Age and Silver Age of comics have given us some memorable stories and characters. Both eras delivered some head-scratching moments, so Kav and I decided to break down some of the most ridiculous panels from the comics and expose some of the flaws.

Today's selection is Action Comics #326 titled Superman vs The Legion of Super-Creatures.

Let's review pages one to three. Click on the images below to read the comic. 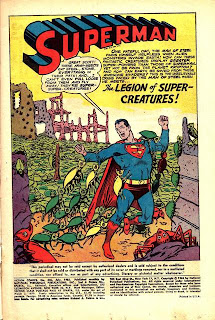 Tony: I'll agree that it's not an impressive opening panel, but I'll start out by saying I've never been a fan of Superman. The guy is pretty much indestructible plus he's pretty dopey as a hero. Look at this mess of an opening page. Superman's pose is that of a man yawning. Did you read what Superman said? If the bugs eat everything, then why are they not eating Superman? It's not good when the first page is a FAIL. 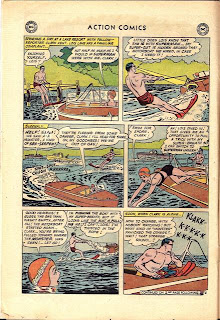 Kav: This starts off like any horror film where people are happily water skiing. As far as I know, this is one of the few, if not the only image of Clark in swim trunks. Clark pushes the boat, which is towing him, with super breath. Apparently, he knows nothing about the laws of physics. Specifically, the one about equal but opposite reactions.
Tony: I am dumbfounded by Lois' lack of common sense on this page. First, what kind of person takes a boat out without checking the fuel level? "Oh, the thingy reads 'E', that must mean 'Enough'". And when the boat runs out of fuel, Lois just dives right into the water so she can swim to shore. Why would you abandon ship to swim to shore to get fuel? Is she going to get a can of fuel, strap it to her back, and swim back to Clark? The boat is not on fire you nimrod. I'm sure a good Samaritan would have assisted Lois and Clark. Don't forget, the people on the other boat mentioned a sea creature, so Lois dives into the water. Lois' ultimate moment of stupidity is when she sees Clark "pushing" the boat with his breath. This highly impossible and insane moment is made even crazier by Lois thinking to herself that the boat must have had enough gas and had the ability to steer Clark on the water.
Page 3 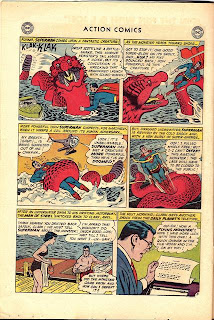 Kav:  Why doesn't Lois know that Clark is lying when he says, "Wait till I tell you what I - uh - saw"? There is a creature stronger than the guy that can singlehandedly demolish the earth, so Superman's response is 'The lake will have to be closed...".
Tony: I'm glad we're only reviewing the first three pages because my anger is at a Lewis Black level. What's puzzling to me is that the creature appears, causes some major waves, and then goes back to some lazy swimming after an altercation with Superman. What a lousy, stupid creature. Drop some depth charges down there and blow up the Loch Ness Rattlesnake for crying out loud. END OF STORY.
Don't worry folks, Kav and I have some more Superman comics to review for upcoming articles.
- August 11, 2011