TALES FROM THE FUTURE: CHARLIE'S STORY

I review the Champion City Comics project list on a weekly basis and am amazed how much we have developed as a community over the past two years. Champion City Comics was launched with one title and now we have fifteen available for viewing. Don't worry folks, we have another eight stories currently in development.

Earlier this year we released Tales From The Future: The Number 18 a five page noir sci-fi tale that was to be the first of many installments for the series. A. Kaviraj and I wanted to develop an anthology of classic sci-fi tales that would be published and we even recruited some talent to assist with the project. Although we have five pages completed, we are not giving up hope. In the meantime, you should check out Charlie's Story.

Charlie's Story was written, pencilled, inked, and lettered by A. Kaviraj.Click on the image below to read. 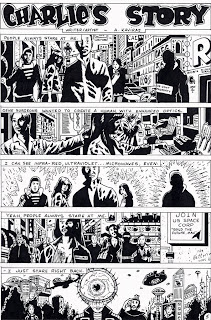 Email ThisBlogThis!Share to TwitterShare to FacebookShare to Pinterest
Labels: Science-Fiction