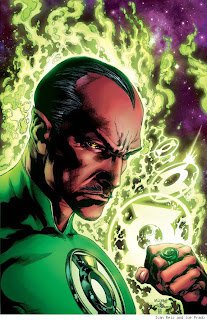 Green Lantern #1, written by Geoff Johns (52, Blackest Night, Flashpoint) and art by Doug Mahnke (The Mask), begins following the events of the War of the Green Lanterns. Sinestro has been reinstated as a Lantern while Hal Jordan has been stripped of his ring and rank. This story focuses on both Jordan and Sinestro.

Sinestro finds himself in a no-win situation. The Guardians have chained him down until he says the oath and is told in no uncertain terms that he is expected to “protect his sector”. Sinestro takes to the stars and returns to his home planet of Korugar where he discovers that the Sinestro Corps have enslaved his people. After a brief, yet intense fight with a corps member in space (All I’ll say is garrotte construct) Sinestro jets to the stars.

Meanwhile on Earth, Hal Jordan is having a tough time due to the fact that he has no money, no job, and no apartment. He has a run-in with Carroll Ferris that sets a tone for his character development for as long as he is ringless. The book ends with Sinestro finding Hal and telling him, “If you want your ring back, you’ll do everything I say.”

The art by Doug Mahnke was good but not great. I enjoyed it, but there have been better artists for the New 52.

Overall the story seems fairly generic as first issues go which isn’t necessarily a bad thing, but I found myself somewhat unimpressed. I have high hopes that the following issues will flesh out and impress, but this issue was just a so-so issue.