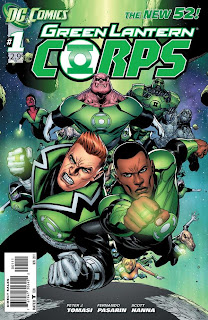 Written Peter J Tomasi
Pencils by Fernando Pasarin
Inked by Scott Hanna
Synopsis.  Can a Green Lantern have a life outside of the Corp?
First off, I like this book.  The art was just fantastic, it was tight, detailed and very well colored, unlike Green Lantern. The Green Lantern Corps focuses more on the other two human lanterns, John Stewart, and Guy Gardner.  Having some down-time, the two decide to embark on a life outside of their Corps only to find that it's not really what it's cracked up to be.  Apparently being a lantern means not having a day job because both Guy and John have a terrible time at finding work.

Meanwhile, something bad is happening in Space Sector 3599 which is  home to the creepiest Sinestro Corp Member, Kryb. You remember Kryb? He's the vile kidnapping alien Quasimodo.  Well he's not in this, but I found the information relevant.
So, two lanterns are sitting in a space station in Sector 3599 with an inmate when a hidden, or incredibly fast entity, slaughters them both with what appears to be telekinesis, or a super fast sword.  The only hint we get on who this is, are these lanterns dying words,
“It's not possible..how are you...”
We then see some enigmatic green eyes and the following cryptic rebuttal,
“Where there is a force of will..there is a force of destiny!”
Then he slices the lantern in half.  It shows no weapons, no nothing, but just a bustle of air.  I'm going to go ahead and say that my money is on the Sportsmaster, in this era of bringing villainous obscurities to the spotlight because who else could have a better reason to come back as a serious bad ass?  I think it's time we all knelt before the power of the Sportsmaster. I seriously hope that this is not Cyborg Superman.  How many times are they going to torture this hesitant, but seriously demented bad guy?  Can't a guy just commit harakiri in peace?

Guy and John get a call to go to the planet of Nerro, which is a water world that Kevin Costner would admire, to see why some lanterns have turned up dead.  When they get there, they find the planet devoid of water, and some impaled lanterns to boot!
Joking aside, I'm interested in the book.  The artwork was amazing and I especially like the part when John and Guy depart with the other four lanterns, which was some serious artwork.  I want to know who this bad guy is that can single-handedly overpower lanterns.  I can see it being the Cyborg Superman, but something tells me Sportsmaster is making a comeback.
Overall?  I give it a 4 outta 5 because  it kept my interest, the art really sold me, and I seriously hope Sportsmaster is coming back.
Bret Kinsey is a contributing writer at Champion City Comics.
- September 23, 2011