Kav and I are back to finish our work with Action Comics #311.  If you missed part one and part two then get reading and come back for this entry. 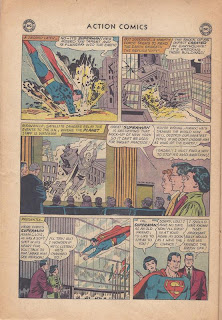 Kav: Jimmy groans, "GREAT! Superman is destroying that mock-up city now it can't be used for target practice". Yeah, Jimmy that's real f***** up. He should have just destroyed a REAL CITY.

Tony: I'll go back to my rant that the Chinese government wasted millions (maybe billions) on developing a mock-up of New York City only to blow it up with a missile. Could they have not called the Japanese and said, "Yeah, tell us what happened at Hiroshima and Nagasaki. Oh? Complete destruction? OK guys, scrap the plan!" I love how evil Superman, the man who is planning to destroy the planet if he is not crowned king,  is willing to give Lois a ride home. *CRACK OF THE WHIP* 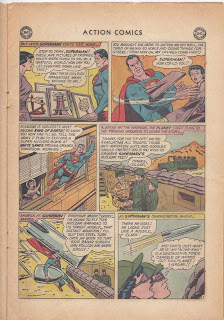 Kav: Lois keeps pictures of Superman's TROPHIES on her dresser. STALKER. Look at Lois's expression in panel two. Later Lois says, "There he goes! He looks just like a missile, Clark." Freudian slip?

Tony: I'm amazed that Lois is not totally turned on by bad boy Superman. Chicks dig a little mystery and a whole lot of attitude. Superman is going to detonate a super-nuclear bomb? That bomb looks like a missile. For those of us that have read The Dark Knight Returns we know that Superman can do the job, but should he have used the bomb to blow up the Chinese mock-up? Why do all of that destructive work on your own? Evil leaders use their secret weapons. It would had been cool if Superman handled the bomb situation this way. 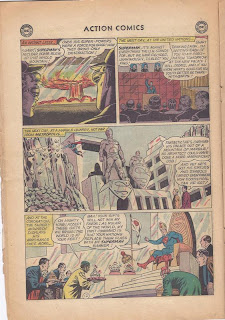 Kav: I have to stop here as an artist and point out how well drawn panel one is. That Curt Swan was incredible. It makes it better to ridicule a story with a good artist because you can see exactly what you are making fun of. Hi-res, like. Then Superman demands gifts like a spoiled kid on the day before their birthday. Funny. Then he rejects the gifts when they bring them and demands Superman flags instead. Yep, he's definitely like a spoiled little brat.

Tony: King Idiot decides to have a ceremony where gifts are brought to him by delegates. If any of those countries had a brain then they would get their secret agent to gift wrap some of that green kryptonite and hand it to Superman. Game over, punk. Is it just me or does Superman look like a bishop rather than a king? Also, where the funky fresh is Luthor or Brainiac? I'm sure they'd want to take out the king so they could become the new king of the world. Also, what leader builds their own palace? Watch this video and learn, Superman. 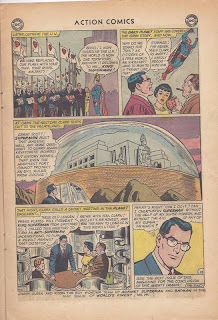 Kav: Ok evil Superman did something good at least-he dissolved the UN. Maybe his reign won't be so bad after all. Hope and Change! Ok the story ends with Clark, Lois, Jimmy and Perry (Does he ever stop smoking? His teeth have got to be brown, man.) plotting against evil Superman. They did the smart thing and hid behind lead press plates so evil Superman can't spy on them. Only one problem-the plates are to the SIDE of them, not OVERHEAD, where Superman is likely to be....

Tony: Oh, now the super-friends of Superman are brought into the picture. Where were they when Superman decided to take over the world? I'm the sure genius writers have them in some other dimension doing something lame.