Kav and I are back to review the classic Superman comics from the Golden and Silver Age. If you missed part one, part two, or part three of our review of Action Comics #311 then start there so you can catch up on the jokes, complaints, and general rants. 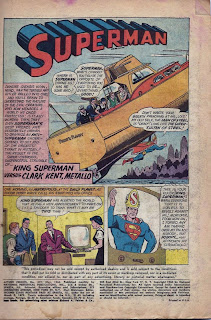 Kav: OK, it's standard recap/intro page. But Superman should be angry about the name of Perry's boat-after all he's THE KING OF THE WORLD! I am wondering why king Superman has to wear a crown exactly though.

Tony: Superman has control of the SS Minnow and he also has control over airspace as well. Don't fly over my palace? Ohhhhh, I'm scared. Where is Luthor? Seriously? When Superman's identity was made public, there was a bad guy on every corner waiting to jump Superman. These inconsistencies are driving me nuts.Also, the Superman crown makes him look like Pope Superman rather than King Superman. Did the maker of the crown realize that there is also gold kyrptonite? Of course not because the writers make Superman into a hapless wit in certain books and then make him the smartest guy in the room when it is necessary. 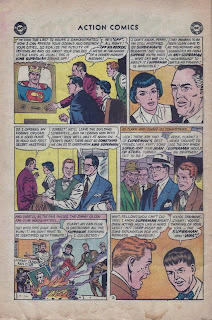 Kav: Superman states that in the last 72 hours he demonstrated how he can freeze oceans and destroy cities. It's a good thing he did this because NO ONE KNEW HE HAD SUPER POWERS apparently. He could have just stated 'Hey, you know me-I'm Superman. You know what I can do. You have five minutes to elect me king of Earth.' Then we see members of the Jimmy Olsen fan club burning 'Superman souvenirs'....uh...they look like PHOTOS to me. Also, what's with the Frankenstein haircut on the kid last panel?

Tony: What genius holds a secret meeting on a boat? Superman has super hearing and has super vision, so I'm sure Superman will never see or hear them in the water from far away. Why not have a meeting next to a pile of kryponite? What's up, King of the Earth? Also, the building for Jimmy Olsen's Fan Club goes beyond ridiculous levels. Who is funding this empire of stupidity? In reality, these fan clubs are in the house of some scumbag looking to make a few bucks off of a celebrity. Why do they need a building? Who is in that building? A CEO? A secretary? Really? Olsen has enough followers that a real estate purchase was necessary? 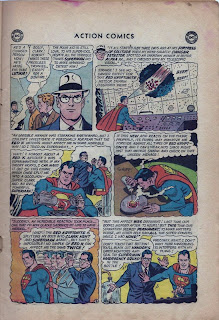 Kav: OK, another recap page so we already covered its absurdities last time. But I gotta wonder why Clark is still wearing glasses. Remember he never needed them and now he has no secret ID.

Tony: For those of you that were too lazy to purchase Action Comics #311 here is a recap of what you missed! How can Superman and Clark Kent become two separate beings? They are one in the same, so why not have a Jekyll and Hyde story instead? 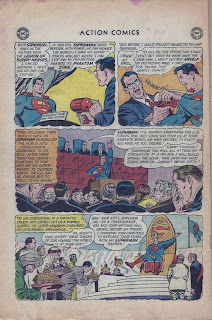 Kav: OK, its a recap page but I just have to state that if that nitwit Clark had just pressed the phantom zone projector instead of thinking of thirty-one words first, he might have pulled it off.

Tony: Seriously, another recap page? You know when a writer has nothing in the tank when they put panels of they rely upon recaps. Come on, DC!  I'm with you on the phantom zone fail by Kent. In the real world, Clark would have zapped evil Superman and the story would be over. However, in the world of comics, one must have a Shakespearean moment before doing something simple. Good grief.


Lucky for you, we have more pages to review. Stick around and see what happens next!
- September 13, 2011