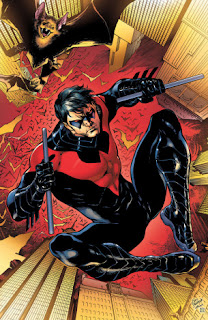 
Nightwing #1 opens just after his nearly year long stint as Batman.  It seems that in this new DCU, the death (in the broadest of terms) of Batman still happened.  Dick spends the first few pages thinking about what being Batman has done for him as a man and a crime-fighter while taking down a psychopath, who is stabbing people to death, on a train. He concludes that, “Now, Gotham has nothing that can scare me.”  Dick is forced almost immediately to eat those words when he sees Haly’s Circus has returned to Gotham.

For anyone who has just gotten into comics, or doesn’t know, Haly’s Circus was the traveling show that young Dick Grayson and his family (The Flying Graysons) performed in as acrobats before he became Robin.  While the method used varies in certain stories, the fact remains that Dick’s parents are killed and Dick is adopted by Bruce Wayne who feels an affinity to the young boy. Dick is trained by Bruce and eventually becomes The Boy Wonder we all know and love.

Dick’s character is really revealed here and it really ties up his internal thoughts on fear in Gotham.  You’ll have to buy the issue to get the whole thing, but it’s definitely a nice polarization of thought.  Dick finally decides to go and even gets up on the trapeze for a bit, even taking a fall purposefully so no one gets any funny ideas.  Meanwhile a mysterious man fends off a mugging in true Gotham style leaving two muggers dead in his wake.

On his way home from the circus Dick is attacked by a masked man who has a very Wolverine meets Kick-Ass feel to him.  I won’t give anything away but the ending of the issue leaves us wondering what the future holds for Nightwing.

The art is good, and does justice to the comic.  And it’s really just that.  It’s not spectacular or especially memorable but Barrows and Mayer do a good job matching the tone of the story with their respective penciling and inks.

Overall, when I’ve woken up and September ends (I’ve got to make my roommate stop listening to Green Day…), and I have to decide what comics I will continue to spend my money on, Nightwing probably won’t make the cut.  It was by no means a bad book, but it wasn’t as engaging for me as some of its other New 52 brothers.

Michael Knoll is a contributing writer at Champion City Comics and is the writer for an upcoming webcomic titled Red Racer.
- September 22, 2011