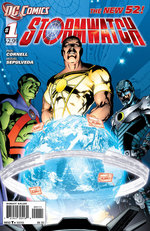 Stormwatch, written by Paul Cornell and featuring the art of Miguel Sepulveda tells the tale of a secret group that acts as the “do whatever it takes” arm of justice. They are the DC Torchwood. While I like where the story appears to be going, it did a sub par job setting it up. I finished the issue and am entirely unsure as to what is actually happening. Similarly to Detective or Action Comics #1 where much of the character set up is skipped because, let’s be honest, who DOESN’T know the set up for Batman or Superman; Stormwatch jumps right into the action with part of the team attempting to recruit a “Superman level” being while the others talk about some artifact in the Himalayas. There is little explanation of anything about the team. We learn that it’s been around for centuries, but that’s basically it. I’m still not entirely sure who all the characters are, or what their purpose is.

The book’s definite strong point it Miguel Sepulveda’s art. I was immediately enthralled with the first panel depicting the Stormwatch HQ floating in space with nebulous tendrils of cosmic lights swirling behind it. Having never heard of Miguel, this issue bumped him up onto my list of favorites.

Overall I was slightly let down with this first issue (although to be fair I did pick it up solely out of my like for Martian Manhunter). I think the book has potential to both be excellent, but also to possibly slip into the over used “We do what is necessary” team niche.