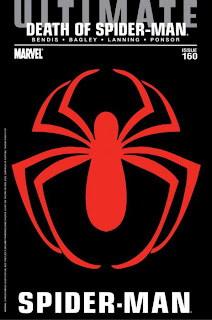 Writer:  Brian Michael Bendis
Artist:  Mark Bagley
What can I say about this issue? First, I'm filled with doubt concerning the actual death of our beloved Peter Parker.  I recently read 160 issues of this franchise and am not buying the “death” angle. In the Ultimate Universe, Peter Parker is a sixteen year-old, which is something I rather liked, because all the wise cracks, and constant drama could only happen to a teenager. This Peter Parker is incredibly likeable and throughout the entire 160 issues, he has been thrust into situations which I don't think Stan Lee ever envisioned.  Bendis does a superb job of re-creating Peter Parker, and at the end of the issue, even though the doubts run rampant, you have a hard time knowing he's going to die, albeit quite unconvincing.
Before I review this issue, I will provide a brief back-story, and I'll do this with minimal spoilers, because you should really be reading it instead of using the Cliffs Notes version from some thirty-three year old hippie suffering from a cold!
Norman Osborne is alive.  How?  I have no idea, but he keeps evolving, which seems to be his superpower.  He breaks out Kraven, Electro, Doc Oc, Sandman, and The Vulture from Shield Headquarters.  They have one plan (SURPRISE) which is to kill Peter Parker.  In this universe, practically everyone, and I mean everyone already knows Peter is Spider-Man.  Another batty thing about this universe, which I find incredibly odd, is Aunt May is at a halfway house due to the drama of Peter’s life.  Bobby Drake (Iceman), Johnny Storm (The Human Torch), and Gwen Stacy all live in the same house with Peter and May.  Bendis made it work, but I just really struggled with why he needed to do that, but that's another review.
After the escaped villains have a tussle with Iceman, and The Human Torch, the only ones left standing are Sandman, Vulture, and Electro.  Mary Jane is on the phone trying to call Peter, but unbeknownst to her, he's in some serious trouble a block away. Spider-Man took a bullet from the Punisher while saving Captain America, and all of this occurred on his way home.
Mary Jane freaks out when a burst of electricity arcs out a few blocks away by Peter's house. What happened was Electro wanted to be a hard ass and kill Peter himself. However, while taking his eye off the ball, Aunt May, brandishing a .357 magnum, puts him down with three rounds in his back. His death causes the discharge which then disables Sandman and Vulture.
Apparently that explosion is what the Green Goblin needed to wake up, so he returns trying to kill Peter, May, and Gwen.  Peter is able to get them to safety, but takes a shot or two in the process before rousing an unconscious Johnny Storm to help him. Johnny charges the Goblin, and tries to burn him to a crisp, something he did earlier mind you, but instead of damaging him, he actually supercharges the Goblin.  Why didn't that happen five minutes ago?  Seeing as there's no other way to stop the Green Goblin, no chance for help, Spider-Man hits puberty and proceeds to lay down an atomic ass whooping on the Goblin.  However, the Goblin gets back up.  Peter is just staring at the Goblin because he's done everything but hit him with a truck!
Then Green Goblin get's hit by a truck!  Driven by Mary Jane!
And now that Peter has hit Goblin with everything, including a truck, he thinks it's over. Peter gets Mary Jane out of the vehicle, but the Goblin whimpers “Urrrr” so Peter picks the truck up, and starts slamming him repeatedly until the truck explodes launching him into the front yard of his home.  After some tears, and some pretty nice fight scenes, Peter can't hold on any longer.  He's been bleeding out from the gun shot and tells Aunt May that although he may not have been able to save Uncle Ben, he saved her.  Then he dies.
Now the reason I'm uncertain about this death is simple.  Gwen died many issues prior, but returned because she was a genetic replica of her dead self. (That’s another review)  Peter has a clone in Jessica Drew, and Norman was shot point blank in the head while de-powered and still lived.  I just don't think this is it for him.  I loved reading these 160 issues, and it really revived my like of Spider-Man, which is another reason I don't think he'll stay dead long.  There's a reason Ultimate Spider-Man was able to move on to 160 issues, and none of the others were able to the same.
I give this one a 4.0 out of 5 because of the whole Johnny Storm inconsistency, but a good read regardless.
Bret Kinsey is a contributing writer at Champion City Comics.
- September 14, 2011