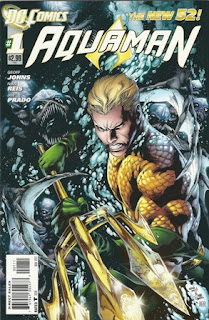 
Julie Christie, the rumors are true
As the pages turn, my eyes are glued...
- Yo La Tengo
There was something of a buzz surrounding the release of Aquaman #1 by Geoff Johns. The owner of a local comic book store told me to expect Aquaman to be the pretty awesome because DC was going to turn him into a "major badass". I didn't want to get my hopes up because it was Aquaman and I had tried in the past to like him as a character, but it never happened. After reading the first issue, the buzz was right. The Rodney Dangerfield of the comic book world is back and it just might be one of the best and most promising titles of The New 52 by DC Comics.

Geoff Johns was given the task of making a comic book punchline into a superstar. He definitely succeeded in his work, so congratulations to you, Mr. Johns. How did he do it? Johns incorporated the "Aquaman is a joke" into this first issue, which was a great read. I'm not going to spoil the issue, but what I can tell you is that Aquaman has some personal issues down in the Atlantic, plus he has some PR work to do as well on the surface. I was going to write that Aquaman had issues "down below", but that would imply that he had jock itch or something unfortunate. Also, a new danger has emerged and it is something that will not be an easy victory for our hero. It is very important to note that a new reader will not be lost, which is typical of these New 52 comic books.

If I were to pick my favorites of the New 52 just based on the first issue then I would choose Wonder Woman and Aquaman. My overall thoughts on Aquaman is that we have a great mix humor of drama. The story is well paced and the artwork of Ivan Reis and Joe Prado make the story very engaging.The dangerous threat introduced in this issue will keep readers interested in this title and I for one will be purchasing future issues.

TonyDoug Wright is the owner and editor of Champion City Comics. His webcomics include Dr Death vs The Zombie, The End of Paradise, and Day 165.
- October 07, 2011