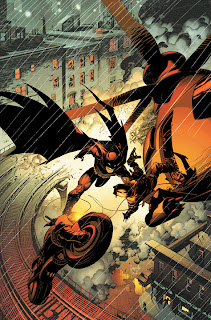 With a cliffhanger leaving Dick Grayson implicated in murder, and a flaming death sentence for Bruce Wayne on the wall, the first issue provided some momentum for the second issue. Batman #2 utilized the momentum by talking about gargoyles for two pages which at first seemed to be a bit of a kill joy, until Bruce came crashing through a window with assassin knives in all his major arteries, restricting his movement. We then have a flashback 23 hours prior to the window crashing where Batman is investigating the man who Dick supposedly killed. Gordon helps him get access to the body, by means of a scanner installed in the security cameras. Batman finds several clues that tell us the victim was a rich man’s sword trainer. His wisdom teeth bare the markings of a “nonexistent” secret society called The Court of the Owls. Batman assures Gordon that they don’t exist. Nightwing shows up and tells Batman that he ran into the man at the party held in issue 1, and that as the man was being dragged away, he scratched Dick’s hand which explains the DNA. Bat’s has already corroborated his story with security cam footage. Bruce goes to meet mayoral candidate Lincoln March and they talk about making Gotham better until an assassin dressed like an owl tries to take down Batman. Going out the window they fight, and Bruce grabs a 13th gargoyle he neglected to mention in the beginning, leaving the assassin to plummet to his doom. Later we witness the assassin had faked his death and murders the ambulance drivers and escapes. While this is going on, Batman has a monologue about how the court can’t exist because he knows Gotham well enough to know they don’t exist.

I’m really digging the revamped Batman. He’s not the omniscient, omnipotent, infallible God Bat that was starting to surface. This Batman can be hurt (fairly badly), he can be outsmarted, and most importantly he can be WRONG. The gargoyle thing at the beginning sets it up for the secret gargoyle later on, as opposed to him just landing on it and then saying that he knew about it the whole time. I’m rambling and probably a little nonsensical right now so I’ll move on.

The art by Greg Capullo is really cool for this comic. It gives it a gritty feel, and the covers are phenomenal. There’s the panel where Bruce is standing triumphant on the secret gargoyle and it’s just…awesome.