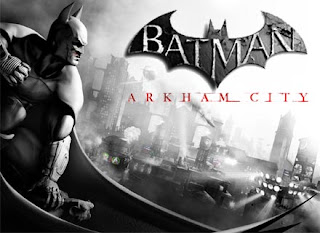 The highly anticipated game Batman Arkham City is out; and after almost 12 hours of campaign (I didn’t do many side missions to begin with) I, that is to say Batman, have stepped victorious from the abomination that is Arkham City. The real strength of this game is the sprawling map and comprehensive cast of characters. And I mean COMPREHENSIVE. Since beating the game I’ve completed a number of side missions and have thus encountered Joker, Two-Face, Clayface, Mad Hatter, Penguin, Bane, Solomon Grundy, Mr. Freeze, Victor Zsasz, Harley Quinn, Rha’s al Ghul, Talia al Ghul, Riddler, Hugo Strange, AND legions of thugs. And that’s just the villains.

The story of the game is pretty engaging and keeps you running all across the map. The main mission task involves Victor Zsasz calling random payphones and you rarely stop moving for long. I haven’t been able to play the Catwoman missions but I’ve been told that her parts are fun to play, and doesn’t seem like a contrived way of sexing up the game.

The game-play varies almost un-noticeably from it’s predecessor. One thing I really enjoy doing is gliding. It’s similar to gliding the original game, but this time you can go into a dive bomb to gain momentum and keep gliding. Also you can use your grappling hook to grapple to a ledge and immediately go back into a glide. The fighting is standard, and anyone who has played Asylum will already be familiar with it. This time around they’ve added a few more combos that utilize almost every gadget, gliding, grapnel boosting, and the various new special thugs. 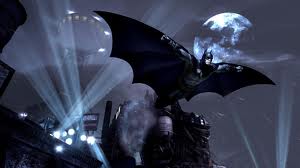 That’s right, there's more than just gunmen, knives, bats, and tasers to deal with this time. Arkham City inmates have utilized crude armor and shields, making them an even bigger pain in the ass to deal with. This brings me to my first real gripe with the game. It’s really freakin’ hard. I play on normal on my first go because I figure it’ll give me a challenge but still be manageable. Wow, was I mistaken. The number of thugs, both special and normal, that I encounter in almost every main mission fight is ridiculous. It felt like I was playing on hard. It was rough and I swore A LOT.

Visually the game is stunning. It captures the grime and filth of Gotham, and amplifies it accordingly in line with the idea of a cordoned off prison city. I’m very impressed with the level of detail that the developers added with everything from decrepit buildings and ravished bridges to news paper stands and fliers littering the streets. Acrosst the bay, and on either sides of the retaining walls you can see Gotham City rising brilliantly lit, and even pick out a few landmarks.

Which leads to Riddler Challenges. I LOVE RIDDLER CHALLENGES. I love the whole game, but I love the references to Batman canon at large. Finding famous buildings like the Iceberg Lounge, or the store where Mad Hatter worked before he was a villain, and so on. It’s just really cool to let my inner comics nerd run rampant across the city. Not to mention the Riddler Trophies that now require some form of interaction. Almost every Riddler Trophy you’ll find is locked in some kind of cage and you have to figure out how to free it. It’s usually pretty straight forward, but some of them are real brain teasers.

There’s a few minor audio and voice acting issues that are minimal. During a few of the early cut scenes Batman’s voice is inordinately loud in comparison to some of the other characters. It’s like they all recorded in a big studio, and then recorded Kevin Conroy in an airline bathroom. Similarly once you complete a mission, or even fail it, the voice acting is sort of half-assed. Joker and Harley are fine, but Strange, Two Face, and Rha’s al Ghul are just a couple who lack in quality of writing and enthusiasm. 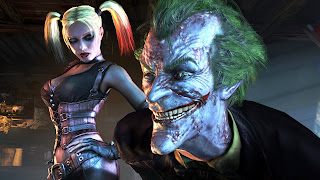 Another thing that I LIKE about this game over Asylum is that you can set custom waypoints. Similarly it auto sets your waypoint while doing main missions. The waypoint shows up both on the map, but also puts a big ole Bat Signal in the air over the location in game. I can’t tell you how much time I wasted in Asylum checking and rechecking the map to make sure I was going in the right direction.

One last negative that I’ve heard some friends mentioning is the lack of “Boss Fights”. Let me clarify. There ARE bosses, and you do FIGHT them, it’s just not quite what you would think. The boss fights in this are a lot of beat ‘em ups. You fight the 50 plus thugs, and then takedown the villain. There are really only one or two boss fights that aren’t like this. I don’t really have a problem with it because each fight, after the 50 plus guys, is unique in it’s own way.

That’s really all I can think of. Apologies to anyone who was looking for an in depth breakdown of the story, but I’m not about to ruin it for anyone who hasn’t played yet. I’m going to say DEFINITELY go out and get this game. The positives far outweigh the few negatives I’ve encountered. I had a lot of swearing, but even more fun.