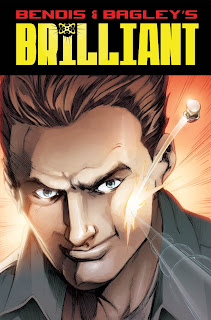 Brilliant opens the doors to a new generation of super heroics. The story opens with Amadeus, a young man, robbing a bank by some kind of telepathic control. As he is escaping, a security guard fires his gun and hits Amadeus in the face. The bullet just bounces off, and Amadeus humorously tells him where to stick his gun. Later that day we are transported to a college campus where Albert is moving in after a semester off. His friend Kindred greets him and takes him into a waiting birthday party. This college, which appears to be called Shawshank, is a school for exceptionally gifted students of math and science. Albert is reunited with other friends; Marie, Izzy, and Amadeus. That night at the “after party”, on a roof where most of the people present are reassembling the security car that took one of their friends away, Albert learns the amazing secret of his friends. They’ve been working on how to “crack” super powers and they’ve succeeded. The issue ends with Amadeus inviting Albert into the fold.

The story seems immensely promising. Just coming off The New 52, and having read probably a dozen first issues, this book is really good. I mean REALLY GOOD. It sets up the events to come but at the same time is interesting and even a little action packed. When I tell friends about this issue I say that it makes me think of the movie 21 (about the MIT card counting group) but with super powers. It’s already evident that Amadeus isn’t going to be be very responsible with his powers which will lead to conflict with either the group, or Albert who is portrayed as a good guy.

The art by Mark Bagley is good. I’m not familiar with his work so I don’t really have much of a reference point. In fact, if I HAD to pick a weak point, the art would be it. It’s not stunning, but it’s still good. It just seems like general comic fare. However it really sort of works in this “real world with super power” kind of story.

With high hopes for future issues to come I would easily recommend this book to anyone and everyone.