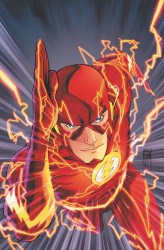 
As a big fan of The Flash, I had high expectations for issue #1 for reasons I can not explain. OK, maybe I can explain them but perhaps there is something I don't want to admit. Was I drinking the "It's going to be awesome no matter what" Kool-Aid? Perhaps. Did a delusional part of me expect the new team for The Flash to be Geoff Johns and Carmine Infantino. Yes. *Sigh*

I purchased the first issue and read it during my lunch break. Overall, the first issue by Francis Manapul and Brian Buccellato was good, but I felt the issue was lacking in many areas. First, let me say that having Barry Allen back as The Flash is great. I never treated Wally West like the Sammy Hagar to Barry Allen's Diamond Dave. Now that we have that out of the way, let me say that I was hoping to see one of the Rogues in this issue as the main enemy of The Flash. I'll step up and say that villains like Captain Cold, Professor Zoom, and Gorilla Grodd are some of the most underrated villains in the DC universe. Those dudes are some bad mamma jammas.

Barry is likeable in this first issue and that's not the problem. My issue is that they've changed his world for this relaunch. As you may know, he is not with Iris West. Barry's got another main squeeze in this issue and I'm irked that they split them up for some romantic tension.

I was not overly impressed with the villain or villains because they did not use a Rogue or anyone recognizable. The villain or villains in this first issue has a link to Barry's youth. The story does a good job of connecting the dots, but I felt slightly disappointed at the end of the first issue because I felt that it would not capture the new readers of The Flash. The New 52 have been good in that department, but with this issue, I felt this title could have gone to another level and made The Flash a top five comic for the company.

I will stick with The Flash and see where this title goes with Barry Allen. I ask new readers to be patient and give this one an issue or two to see if it is something you'll keep up with on a monthly basis. There is potential here for this title to heat up and be something special, but someone needs to turn on the heat, please.

TonyDoug Wright is the owner and editor of Champion City Comics. His webcomics include Dr Death vs The Zombie, The End of Paradise, and Day 165.
- October 08, 2011