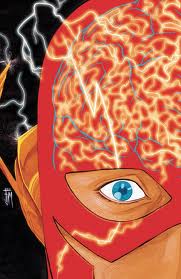 
As a big fan of The Flash,my first impression of Flash #1 by Francis Manapul and Brian Brian Buccellato was a less-than-memorable issue. The owner of my local comic book store said it best when he told me, "Yeah, I read that issue but remember nothing about it at all." My thoughts exactly. Of all the New 52 #1 issues I had purchased, it was Flash #1 that I could not remember that well. It is sad to have to re-read one of your favorite characters' debut titles to refresh your memory. I like to re-read my comics because they are amazing works of writing and art. I know the fanboys are going to want to know why I have a negative opinion of the first issue, so allow me to share my personal opinion. Let me give you a quick overview of my displeasure. The first issue of The Flash was an unimpressive debut where Barry Allen went head-to-head with an army of clones that looked like a second rate version of Cobra commandos. Not only were the villains unimpressive, but the story itself was in my opinion a slow page turner that did not end with me thinking, "Wow, I have got to see what happens next!" Instead, my thoughts were, "Wow, hopefully they get it together with the next issue."

Manapul and Buccellato have rebounded with Flash #2 which has given me a glimmer of hope for this title. While some issues with the story have improved there are some problems in my opinion that have the story somewhat stuck in a problematic state which is fixable. First, let's discuss the villains. They are clones which were created from one of Barry Allen's good friends named Manuel and those clones have taken him hostage. The Flash is fighting clones and while they are large in numbers, the Fastest Man Alive has no problem using his speed to knock them out one by one. The first few pages of Flash #2 shows us how this should be an easy victory for our hero. However, the way he is halted is disappointing. The clone leader says they have taken Iris West hostage, so they tell The Flash to stand there and count to one thousand while they run away with Manuel. Stop the presses. The Flash can move a great distance in the blink of an eye and he should be able to call these guys out on their bluff. However, he doesn't and finds out it was all a lie when Iris calls. Hey genius, use your speed to get out of their view and call Iris or even run around the city to see if she is fine. Also, why didn't The Flash do something drastic like break the legs of his enemies? If you are fast and fighting a group in numbers then immobilize them by any means necessary. The Flash does not do that and he allows his enemies to regroup and cause more havoc. I'll admit that I'm warming up to the clones because they know they are dealing with someone they can toy with and they seem to create some devious problems for our hero.

My second issue is that we seem to have a slight overload of secondary characters. Apparently, Manapul and Buccellato have decided to introduce to us every person Barry Allen knows in the city. Instead of a trickle of introductions to establish the characters for the sake of new readers we have to keep up with Barry going from co-worker to co-worker and friend to friend for assistance and advice. Yes, The Flash lives a fast-paced life and I understand that completely. However, it is easy for certain elements of the plot to get lost when we jump around too much and not establish various sub-stories within a plot.

My last problem is that The Flash of The Justice League series by Geoff Johns appears to be more complete as a hero than the hero in training that we see in Manapul and Buccellato's story. What is more frustrating is that the Johns Justice League supposedly takes place five years before this story.

You may be wondering if I have anything positive to discuss. I do and it is the artwork, which is beyond impressive this issue. For some reason, Manapul's work did not impress me with the first issue, but there are some incredible panels with the second issue that gives me the glimmer of hope. I shouldn't say glimmer. There is more than that with the artwork alone. My first "wow" moment was the credits page where we have a long red panel of The Flash fighting the clones. That was very well done. Beautiful work. There is a moment in this issue where Barry realizes that his thought patterns can move quickly just like his body and we are treated to a cool panel of Barry going to a higher level of awareness. Manapul also delivers an awesome pair of pages where Barry is using this new found awareness to take care of a series of problems in the city. Also, the last page of this issue was well done. You want a cliffhanger of an image and Manapul gives you that with The Flashing experiencing a major "Oh, hell..." moment.

I also enjoyed how issue two ended. Those crazy clones have created some major problems for The Flash and after reading this issue, I thought to myself, "Wow, I have got to see what happens next!"

Email ThisBlogThis!Share to TwitterShare to FacebookShare to Pinterest
Labels: DC Comics, New 52, The Flash, The Flash#2