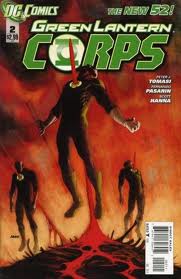 Written By: Peter J Tomasi
Pencils: Fernando Pasarin
Inks: Scott Hanna
This issue picks up where Green Lantern Corps #1 ended. We return to a planet that has had its entire water source removed, an entire amphibious race killed, plus several Green Lanterns were impaled in the process.  If you read my first review, you know I could have sworn that the Sportsmaster was behind this.  Well, surprise, he's not.  This is disappointing in so many levels but now is not the time, nor the platform for me to vent my frustration at this Golden Age villain.
A mysterious force is at work in this issue, in what I had assumed was a sole conspirator, but turns out to actually be a whole army.  After the Lantern team visit the planet Nerro and find it devoid of water, they find fellow members of the Corp impaled, and their ring fingers removed.  After some heated, heartfelt words the story takes us to an undisclosed location where we find a black figure surrounded by four oddly shaped Lantern power batteries.  Being that they are all the same, I can't quite put a finger on how this guy would have these batteries, but I keep going back to the whole green eye's thing.  In this issue, and the first there seemed to be an emphasis.
Turns out this mysterious man is harvesting the resources of other planets in an effort to revitalize his own, barren wasteland world, and there's still one more target left named Xabas, a planet inhabited by awesome looking squirrel folk.  The Lanterns receive a message that there is a problem on the planet and go to investigate, when they arrive, they find a huge wormhole vacuuming the planet of it's awesome squirrel people.  When they get there, they are able to seal the wormhole and stop the suction, but something on the other side is trying to get through.
The giant seal the Lanterns have used suddenly erupts and then it's a free-for-all slug fest with the Green Lanterns taking on some black garbed minions wielding green lightsabers.  Someone please kill me.  I was thinking that if we were going to have such epic bad assery happening that if it wasn't going to be the Sportsmaster, it would at least be some lone super being doing this.  It's not.  It's an army of bad guys wielding green light sabers. Light sabers?
Allow me a moment to rant, a Jedi Consular would never use their awesome powers of the force for this kind of crap.  What is happening here has nothing to do with spreading peace and harmony through diplomatic measures and studying the secrets of the force. In my time at the academy I decided that Consulars were in fact pussy's regardless if that's the path Luke undertook.  That's why I decided to be a Guardian, and wield the blue crystal in my saber. But that's just me. George Lucas is phoning his lawyers as we speak.
So the interesting thing about these baddies is that they are somehow able to overcome the Green Lanterns energy and level the playing field.  This results in a more physical confrontation which I actually enjoyed, but the bummer is what happens to Isamot Kol.  The raptor bad ass reseals the wormhole but in doing so finds himself on the other side, and that is not a good place to be.  After finally capturing the wannabe Jedi’s the Lanterns find out that the squirrel people exhale a source of element that was vital in sustaining life on their dead planet.  Before more questions could get answered Isamot Kol erupts through the wormhole, and he's missing his arms and legs.  This saddens me greatly.  Not only do you have a Raptor, but you have a Raptor Green Lantern, and now he's reduced to this.  More baddies swarm through the wormhole and we are left wondering what is going to happen now that the Lanterns are about to face a whole army of these guys.
I can not give this issue a great score.  I was really let down that this was not going to be the premier of a super hard ass villain, just another version of Sinestro and his corps.  The artwork was again fantastic, but damn this story went somewhere were I didn't think it would.  The Jedi Enclave.  George Lucas is so pissed right now.
3.0 out of 5.0