Ladies and gentlemen, it has been one month since we last had a Kav & Tony article, and we apologize for the delay. Are you new to our series? Fear not because you can catch up with our on-going review of Action Comics #312 by reading part one and part two of our review. 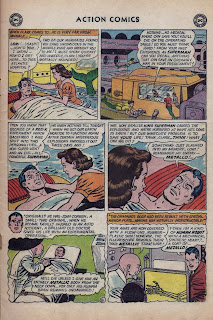 Kav: This page is a mind-blower. Shot Clark wakes up in Atlantis, after falling into a creek in Midvale park. He wakes up in an operating room for HUMANS, with water lapping the operating table for the Atlanteans. The Atlanteans apparently built this OR just in CASE a human ever needed surgery in Atlantis. Luckily for the Atlanteans, there's a big picture window in the OR so  Atlanteans on the way to the fish market can watch the surgery. We then get a recap of METALLO, one of the dumbest villains ever. His power? He has a piece of green kryptonite in his chest. Why this is more effective than some dude with a piece of green kryptonite in his pocket is beyond me.

Tony: You have to review page eight here to understand the overall stupidity of the characters in this comic book. Clark Kent is shot by the police at point blank range so they can check to see if he's Superman. Somehow Clark "toughed it out" and pretended the bullet's impact did not hurt. MADNESS! I thought page eight was awful but page nine takes the foolishness to another level. I enjoyed the Atlantean swimming by with the serving tray of food with the covers on them so that the food would not get wet. Brilliant. Also in this panel we have the unnecessary back-story of Metallo. The story itself is another rant but who can survive a surgery where they decide to give you a new body FROM THE HEAD DOWN?! Who wrote this junk? 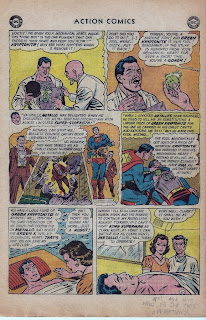 Kav: Clark's big idea to save his life is to tell the surgeon to remove his body and replace it with a metal body, green kryptonite heart etc. Apparently the state of Atlantean medicine is so advanced that just telling someone about a surgery completely trains them to do the surgery. Also, luckily they had a metal body lying around to attach to Clark's HEAD. Also luckily it is just his size. Med school in Atlantis must take about 10 minutes and go something like this: "Ok students, if someone comes in with an ailment or injury just fix them."

Tony: I had no idea a bullet wound from a small caliber bullet requires having your entire body (sans the head) removed and replaced with a metallic body. Doctors can remove bullets, Clark. Your shot to the abdomen could be easily fixed, but since you're stuck in the land of buffoonery then you must undergo the most complicated and unrealistic surgery ever. Did you notice Clark said something about the people of Atlantis having an ABUNDANT supply of kyrptonite? Why not have a simple surgical procedure and have the Atlantean army target evil Superman with their abundant supply of kyrptonite! Oh no, we can't do that because that is simple and we at DC Comics (circa 1960) have decided to take the most complicated and insane routes to solve a simple problem. Remember folks, the problem here is that Clark has decided to have his body (from the head down) removed and replaced with a robotic body. Earlier in the comic, Clark and Superman became two separate beings, another idiotic idea. How will robotic Clark and Superman form one normal being when Clark fools evil Superman? 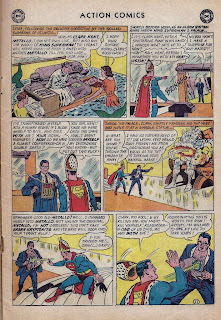 Kav: Here we have the scene where I guess you can't sneak up on Superman with green kryptonite unless it's in your chest. A lead box in your pocket wouldn't work.

Tony: Let me think for a moment. Yes, Superman has x-ray vision and could not scan Clark for a bomb or kryptonite. Superman also has excellent vision and hearing and could not see or hear about this plan coming from a mile away. If Superman scanned Clark then he could have blasted him to pieces with his heat vision. Did he do that? Of course not, because Superman uses his powers when the writer feels it is necessary to use them in certain situations. Ugh, I think we have three or four more pages of this book to review. Let's stop here for today, Kav.

We will return with the exciting conclusion of this comic!