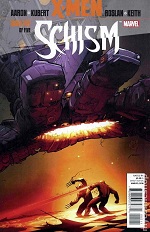 Ever have that one friend that you just felt like grabbing by the lapels and ruining their face with an optic blast? Scott Summers did. And that friend’s name was Wolverine. Knowing that, you’re up to speed with the backbone of all five issues of Schism, the mini-series intended to split the X-world into two distinct camps (thus books): Cyclops and the rest of the Uncanny crew, and Wolverine and the X-Men.

Issue 5 wraps the saga that sets the stage for evolution of Marvel’s million-dollar mutie baby, and if you haven’t been keeping score, the Hellfire Club, now a bunch of silver-spooned brats, are back in the ring and have just sent a massive self-healing Sentinel off to smash Utopia, the mutant’s last bastion of hope in a hate filled world.

Resentment has been brewing between Logan and Cyclops well before the first issue. Issue 4 finally has them to come to blows, claw slashes and eye blasts over whether or not they should turn heel and live to fight another day or stand their ground, a fight-or-flight situation that sees Cyclops siding with Fight and Wolverine uncharacteristically championing Flight.

In the last installment, writer Jason Aaron delivers a few more pages of white-knuckled fury between the two X-icons. It’s well rounded and is liberally peppered with the writer’s signature witticisms throughout the whole story, but the end left me wanting for more buildup and more, well, punch. That’s not to say he drops the ball; I think he did what he could in the page space he was dealt, but more time coulda/shoulda been spent fleshing out the emotional nail that’s being driven into the X-Men team’s coffin and not dillydallying too long with the Hellfire snots. Pencils, at least on this issue, were handled by Adam Kubert so no concerns in that department.

Still, it’s a great story from a Marvel Architect who’s one of my personal favorites and surely will or already has altered the X-Verse for good.