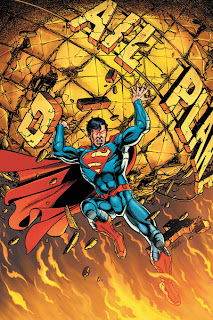 Written by George Perez
Pencil and Inks by Jesus Merino
Superman #1 does not hesitate in the action/character development that we are all looking forward to, but there's just something about it that was lacking.  The art is gripping and crisp, and the back story is compelling, but overall it felt rushed.

The first thing I thought about after looking at the cover was, “Oh no, there's an earthquake in Metropolis and the only help Superman can give is to save the Daily Planet's infamous golden globe!”  Luckily this is not the case, but it does do well in grabbing your attention.

After reading the first page I thought, “Great, more decompression for the future trades....”  But that's only because I've been a Superman fan for a very long time, and really didn't care for a rerun of the back story of the Daily Planet.  There's really a lot of focus here, and honestly, it made my old ass sleepy!  To the new reader, it's a necessity, and being a creature accepting of change, I did my best to roll with it.  The Daily Planet has been bought out by Mr. Morgan Edge, the infamous owner of the WGBS Broadcasting system.  This is DC's effort to bring their pantheon of comics to the new age.  Under this new ownership there is now a “print” version of the Daily Planet, as well as a streaming version of the Planet.  The direction this is heading gives Perry White all the power of the printing side, while ascending Lois Lane to the hot shot position of the streaming, techno savvy, aspect of the new Daily Planet.

With this new ownership has come a new change.  The old Daily Planet has been demolished, and in its place is a new, more up to date broadcasting firm.  As we read further we realize that Superman is not fond of the new face of the Daily Planet.  Ever the devoted and faithful boy scout, he is hesitant to accept the new ownership of the globe, and has some very serious reservations the new owner.  If you read Action Comics #1 you know that there is a series of years difference between then, and now.  However, the comic keeps you snagged, by letting you know that this new owner has ties to the “villain” of Action Comics #1, because the same Glenmorgan that we see in this issue, is the same Glenmorgan referenced as the former owner of WGBS Broadcasting.  This is an obvious ploy to keep the reader interested in what happens in Action Comics #1 and does a great job in doing so, though I regret the lack of highlighting what is happening now.

This issue also catches us up in the scenario of Superman now working for the Daily Planet, and he is none too pleased with the new ownership.  They solidify this with commentary about his disdain, and friction with Lois, about accepting the new change on the basis that WGBS is in fact, not up to standards of what the Daily Globe was known for.

As I read this, I found the “villain” to be a non-factor, and in reality I wasn't really interested in where they were going with this angle.  The first part of the story was so strongly focused on the new ownership that I forgot that Superman was a Man of Steel with near limitless possibilities in power, strength, and intelligence.  This issue of perceived “decompression” was still viable and full of action that I kept reading, but I found myself with more questions than answers, which, from a long time fan, is considered OK for a new reader aspect.

Overall, I'd give it a 2.5 out of 5. I just felt like they tried to throw too much into this issue.  The artist had a lot of things to jump into as well as the writer who seemed distracted with so much “fill ins” that it was hard to decide what was more important in this issue:  Superman's resentment towards change or his “man of tomorrow” facade that we have all come to know and love?  Superman comes across as an antiquated machine hesitant of progress for reasons he keeps only to himself.  Which I would suppose to be fine in a real world aspect, but in a comic, character driven stance, I just had a difficulty combining.  The initial aspect of the flame villain seemed so miniscule that I felt like Superman was completely beneath this type of villain.  The threat just wasn't there.  Superman has been, in my mind, the impeccable boy scout that has served as the measuring point for all hero's to live up too.  It is definitely a “What would Superman do?” adjective.

This Superman seemed to be distracted in all the wrong places, and fodder for the villainous likes of a Lex Luthor.  I guess this shows a “rookie” version of the Man of Steel, but I just had a hard time “feeling” it.  The art was great, and I felt the author made a great attempt at trying to snag a new readers attention, but as someone who's followed Superman for a while, I just didn't really get captured into the story, nor did I feel inclined to read the next issue.  It was like this was just cannon fodder for Grant Morrison's Action Comics #2 which I find incredibly ridiculous.  Why bother writing a Superman title set in a present day sense if you're only concerned with his origin?  I want to know where Superman stands now, not how he gets there!  The history has always served as great filler, not as a primary story.  If we are going to focus on his origin, then lets focus on his origin, not a less important period of putting down a second rate villain with no history or threat.  This Superman just felt rushed, and quixotic.  While I felt that Action Comics #1 was not great, I didn't need another issue trying to convince me it actually was, just for the sake of continuity.  This issue didn't stand alone and just seemed to stroke the “ego” of Action Comics #1.
Bret Kinsey is a contributing writer to Champion City Comics and resides in a undisclosed location for Grant Morrison fans and lovers.
- October 06, 2011