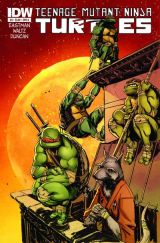 We dive again into the story as Casey Jones and Raphael patrol the streets bringing justice to the world one purse snatcher at a time. Meanwhile, his brothers train themselves to confront Old Hob and his men if they should cross paths again, and continue their search for their lost brother. We flashback to the final moments of the turtles lives as test subjects. They’ve been removed from their facility by ninjas and one turtle was carried off by an alley cat that looks suspiciously like a one eyed feline villain we know. Splinter maneuvers a tricky rescue and saves three turtles, but at the cost of everyone getting covered in mutegen, and the alley cat losing an eye (I called it the first issue! Check if you don’t believe me. I DARE YOU). Splinter comes around and realizes he can talk, and is in his current state. On a rooftop, just before a patrol the three brothers have it out over the, as of yet, unfruitful search for Raphael. Leo refuses to believe that Raph might be dead, and Mikey and Don at least persuade him to do a little more than just look for Raph. As Mikey puts it, “Let’s go kick some ass, take names, AND find Raphael! Win-Win!” Somewhere in the city Raph and Casey stop to get hotdogs and are accosted by two men supposedly fleeing from the cops. As they give chase they fall into a trap set by none other than Old Hob.

I was worried that this new telling, which is very obviously different than the beloved cartoon I grew up with, wouldn’t sit well with me; that I wouldn’t be able to separate the two. I have to say that, other than their names, I forget all about the cartoon once I start reading the issues. I’m being introduced to the story all over again. And I love it.

I’ll say that I think Raph needs to be found in the next issue. I’m running out of patience, and the suspense is starting to get drug out. It’s still tolerable, but I think I can only handle one more issue of it. I like Old Hob as a villain for now. I think he makes a good training villain, a neighborhood Shredder. Something to prepare them for their ultimate enemy.

The art is still spot on in this issue. I’m still having some trouble differentiating which is which when their weapon’s aren’t visible, but that’s still a semi minor complaint.

Overall the turtle’s return to action is into it’s third issue and still continues to be a strong book. Unless they start trying to drag it out I can’t see missing this book in the near future.