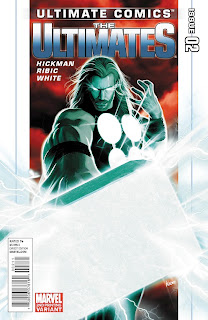 Writer: Jonathan Hickman
Art: Esad Ribic
If you didn’t catch last month’s inaugural Ultimate Comics: The Ultimates, I’ll bring you up to speed: the Ultimates world is all set to go to hell in a Condition Red hand basket as rogue Asian nationalists take their own country hostage and a big-ass metallic mushroom filled with tech-heavy super baddies just popped up in the desert. Add to that Nick Fury’s crapping himself; all our favorite Avengers are either partying, dealing with their own problems (a nod to my UC: Hawkeye review here on the site) or are MIA.
I very much like and appreciate Hickman’s paramilitary special ops take on Marvel’s brand name group of heavyweights. To me, it’s reminiscent of the original Mark Millar and Bryan Hitch series, a kind of Ultimates for lighter appetites with a slight Authority-ish aftertaste. I love those books; I love this book.
Ultimates #2 keeps issue 1’s super-ball rolling. No spoilers, but Thor, fresh off a Captain Britain-interrupted mead binge that went over on the half-cocked thunder god like the proverbial fart in church, finds himself face to face with the techno-villain residents of the mushroom, AKA “The Dome,” who’ve decided after eons of dormancy to finally get around to ruling everything they see, including Asgard. Fury orders a KO’d Iron Man to lend a helping hand if Stark can come back from, y’know, being dead n’ all, courtesy of a small time nuclear detonation. Aside from Hawkeye, the other team members aren’t around or even mentioned, and it’s a shame: throwaway members of Excalibur and some of Asgard’s shiniest champions are having a very bad day and sure could use the pick-me-up.
Aside from Hickman’s spot-on writing, the whole rest of the creative team brings their A games to the book and the series, with Ribic’s pencils accurately capturing the seriousness of the situation, reflected in the character’s facial expressions, especially Thor’s. So far, this, along with the Hawkeye mini-series tie-in, is shaping up to be everything I’d hoped it would.
Verdict: 4.5 out of 5.