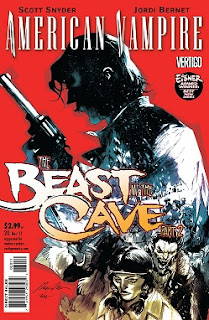 Writer: Scott Snyder
Art: Jordi Bernet
American Vampire is badass. It’s common knowledge to most comic folks, even to those that hand out Eisners.  American Vampire won for Best New Series you know, and deservedly so: Scott Snyder’s take on vamps takes the bloodsuckers back to their original, animalistic roots in a DC Vertigo series that’s both horrific and superheroic at the same time. If you haven’t, play catch up like I did with the two trades that cover the first two volumes, they won’t waste your time. A third is purportedly on the way.
Here with Issue # 20, Snyder keeps his story going and I’ll fess up: I haven’t been into the last few months of the series, at least the monthlies, so I have to piece together the story. The regular ongoing features vampire cuss Skinner Sweet and the lovely protagonist Pearl Jones, who last I saw were in cahoots against a deadly European cadre of vamps in a young Las Vegas.
This issue marks the second in an arc entitled “The Beast in the Cave,” a departure from Pearl’s story and it’s about— well, the title kinda spills the beans, don’t it? A young Native American girl jumps at the chance to leave her dreary life as a wife-slave and go all Sacajawea-like through the western frontier with a couple of mysterious hunters. That’s all I can say and still keep this spoiler free but know that Skinner’s pre-vamped self does make a cameo, although it has no real after effect on the rest of the story.
The quality from page one all the way to the end from Snyder is no surprise. Where I have to dock the book some points is in the art department: maybe I’m too used to series artist Rafael Albuquerque’s work, but sit-in artist Jordi Bernet’s pencils look too odd to go with the normal vibe of this comic. It just seems out of place, like they belong on some other type book. I dunno, not for me I guess.
Still, it’s a book (and a title) worthy of a pickup next time you’re at your local shop.
Verdict: 5 stars for the writing, 3 stars for the art