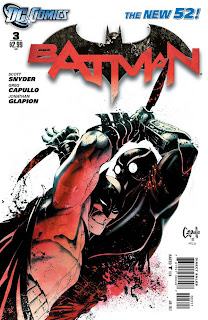 The Court of the Owls is gunning for Bruce Wayne, and Batman rushes to find answers. The issue begins with Bruce’s great-great-grandfather, Alan Wayne, running through the streets screaming hysterically about owls roosting in his house. When he’s stopped by the police he falls down an open manhole cover and dies. In the present day, Batman begins to think that he might have been wrong about The Court of the Owls. Visiting mayoral candidate and friend, Lincoln March, in the hospital it occurs to Bruce how the masked assassin got into his tower without being seen. Batman gives a short monologue about buildings that don’t have a 13th floor and how they technically do, but there’s nothing there; it’s an empty space. He has Alfred call up a list of buildings built through a fund his great-great-grandfather set up and, upon visiting all of them, he finds nests built into each building with portraits of The Court going back to at least 1919. In the last nest Batman gets caught in an explosion with a masked owl man watching from a distance and we are teased with a TO BE CONTINUED.

First and foremost, The Court creeps me the hell out. Their masks in the pictures (coupled with the elaborate dress of who I can only assume is the leader) are KKK enough to be unsettling. That aside, it works with the way Scott Snyder is taking things. We have a shadowy society that undercuts Gotham City, and has been doing it for hundreds of years.

People who have read a number of my critiques of Batman related titles probably know how much I disliked the way Batman was getting before the New 52, omnipotent, omniscient, and just generally uninteresting. The thing that continues to draw me about this comic is that Batman has turned back into a man. In the second issue he takes no less than three knives to his major muscle clusters, restricting his movement. And more importantly, he’s WRONG about the Court of Owls. Scott Snyder is creating a world where there are things Batman doesn’t know and I think that’s really exciting.

The art by Greg Capullo continues to be good, and I have to give him credit for unnerving me with owl costumes.

Overall a great issue to a great series, and one that I don’t anticipat missing for a long long time.