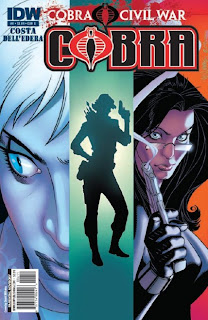 
Warning: This review contains spoilers
The Snakes have hit the fan. Well, they’re preparing to, at least.
Issue #6 of what’s currently the favorite of my monthly pulls, COBRA Civil War, keeps getting better as time progresses and the story unfolds. This month, and I’ll try to keep spoilers to a minimum in case you want to backtrack and snag the five previous outings of the cream of IDW’s crop, a renegade Joe is deep inside enemy territory and itching to tell his boss Bludd about the Joe’s soon-to-be built base.
He’s having a tough time covering his tracks, what with blatantly murdering a fellow Joe to throw off the investigation and all. To brownnose the Snakes he serves, the backstabber plans to transmit any and all details, provided he can make it past some suspicious security protocols set up to prevent just that. Meanwhile, as the ex-Joe digs deeper and Firewall’s investigations close in, COBRA sniper-elite Blacklight has been hitting the road Route 66 style to make it his target, the U.S. Capitol building, a target that competing COBRA Tomax stands to “benefit” from.
Like the other issues in the series, it’s too damn short. Not the creative team’s fault, economies and all that (paper’s EXPENSIVE) but with a book this good, this well edited, inked and colored, it DESERVES more pages. Fans would eat it up. Fans like me – No! Newly devout diehard fans like me—can’t wait, it’s that good. This is the G.I. Joe of my backyard youth, the one comic I look most forward to and the one you should be seriously consider pulling next time you’re at your local shop.
Verdict: 4 stars and not 5 because of lack of pages. More, IDW, more—don’t downsize the good stuff.