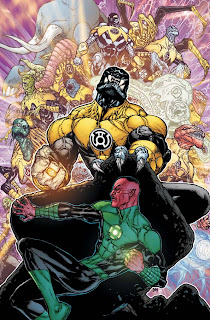 Oa, The Guardian’s chambers. Ganthet, having recently been lobotomized by his fellow guardians (See my review of Green Lantern: New Guardians #2) tells his fellow guardians what he’s learned. Over his time serving in different Corps he’s learned that each army that has been created (The Mahunters and The Corps) have had the capacity for fault. That in the end, they have failed. So Ganthet decides it’s time to sanction “The Third Army”.

Meanwhile, things are finally heating up for Hal Jordan, erstwhile Green Lantern of sector 2814. Sinestro has given him a proxy ring that he can turn on and off at whim. Using that as leverage he’s sealed a deal that ensures Hal’s help in overthrowing his Corps in return for a permanent ring. Together they take off for Korugar, and when they reach it, Hal learns a few new tricks from his old mentor. Sinestro then reveals the failsafe he built into the battery, if a Green Lantern were to enter the main battery, it would automatically shut down. Sinestro instructs Hal to wait until sunset, and then once Sinestro has engaged the corpsmen, to take his lantern battery to the Central yellow battery. As they lie in wait a Korugaran woman named Arsona attacks a corpsmen, prompting Sinestro to break the plan and attack. Hal makes it to the central battery but all does not go well for him. Pick up the issue to find out the thrilling to be continued moment!

I’m really digging this story. As slow as it started in issue one, it’s beginning to pick up steam in a break-neck way. We’re seeing some insanely cool interactions between Sinestro and Hal and we’re being introduced to, what I can only assume will be pants wettingly awesome/terrifying, The Third Army.

Firstly, Hal and Sinestro are one of my favorite team-ups to date. The banter and constant one upping is really great. I won’t go into the over used, “They secretly, deep down, respect each other” angle, but there’s one line that I really like. Hal asks Sinestro why HIM? Why Hal? Sinestro says, “Because as surprising as it is to even me, I can trust you. Especially since I control the off switch on your ring.”

I’m also digging the angle that Sinestro is some kind of Ring genius. He’s doing things with his ring that we’ve never seen before and that’s just exciting to me to see what’s next.

The art by Mahnke continues to be good. There are a couple of panels in here that are really sweet, one of which is Hal socking old Sinestro right in the kisser. Otherwise, still good.

Overall I feel like Green Lantern has finally hit it’s stride. Three issues in and it’s go go go. With The Sinestro Corps still at large and alive, and the mysterious Third Army coming into being, we’ve got a lot to look forward to