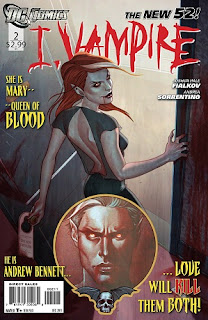 Warning: This review cobtains some spoilers

I like vampires. I don’t like doe-eyed Abercrombie models-with-hair-product vampires that screw around with high-schoolers; nah, man, I mean like VAMPIRES—feral, unholy blood monsters that don’t have sparkly skin, that don’t mind baring their fangs and sure as hell don’t mind snacking on said high-schoolers.

DC’s newly revamped title (yep, intended) I, Vampire fulfills the kind of vamp model I like. I admit I jumped on this book late; it wasn’t part of my 'Must Haves' prior to September’s reboot so I let it slide under the radar, but once I flipped through the book and saw Sorrentino’s absolutely gorgeous, moody and borderline surrealist artwork I couldn’t see my $3 being spent on anything else. Bought the first two issues then and there.

Originally concocted by JM Dematteis and Tom Sutton and now handled by the aforementioned Sorrentino and writer Joshua Hale Fialkov, Vamp #2 picks up pretty much where the first left off, where we were introduced to two vampires: Mary and Andrew. Here’s the scoop: Mary’s a badass created by Andrew who’s risen to become known as the Queen of Blood, AKA the queen bee of the undead. Andrew, also a badass, loves her but we’re still not sure in what kind of way, we just know he has feelings for her. Oh, and he’s hell bent on slaughtering all the other vamps in existence while trying to reason with her enough to get her to shelve her plans of global domination. Despite their tumultuous relationship, they’re not above going at each other’s throats (literally), and in issue 2 they bare-knuckle one another in an attempt to gain the upper hand, but Andrew’s a tough guy—plus he can’t be killed by any known means, so there’s your spoiler.

Even though I don’t care for vampires that go the Stoker route and transform into different forms like wolves and fog and whatnot (and we see all the forms in the first two issues) the art beautifully captures the on-the-fly transformations like a motion capture camera and it works wonderfully.

If you’re tired of your vampires turning fluffy and kid friendly, and you like DC Vertigo’s American Vampire series or you just like bloody good comic horror that strays from DC’s other offerings, I, Vampire fits the bill.

Email ThisBlogThis!Share to TwitterShare to FacebookShare to Pinterest
Labels: I Vampire, I Vampire #2