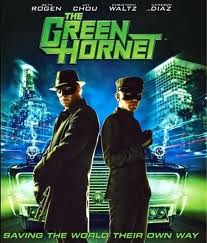 This is the greatest movie ever made! I almost didn't rent it cause I figured it was a B movie superhero movie and those films usually SUCK. But then I remembered that it was barely advertised, and knowing that the amount of advertising of a movie is directly proportional to the amount of suckiness I decided to give it a chance. And I'm glad I did!

The humorous dynamic between The Green Hornet and Kato is great-a joy to watch. action scenes unfold with awesomeness. Kato does a kick in this film I have never seen before: a jumping spinning front kick! I immediately tried this at home and it works! I'm using this baby in my next street fight-like the one I got in where I roundhouse kicked a dude in the head in true Chuck Norris fashion!

The villain is expertly scripted-he gets mad when people think he's 'not scary' then before he blows their cortex across the room as he jamms his double-gun in their face he says, 'Am I scary now?' Ha ha! great!

I can't say enough to praise this film-there is not a single lame line of dialogue in the whole thing-unheard of in Hollywood! A future cult classic for sure. The dude playing Kato is a GREAT Bruce Lee replacement. His accent, his funny lines, he even draws pics of Bruce in his sketchbook. Awesome! I'm sure Bruce Lee is watching this movie from beyond and is giving it a thumbs up. In fact, he told me so. He also told me to tell you to watch it or he's gonna roundhouse kick you!

The original Green Hornet TV show by Willam Dozier was an attempt to capitalize on the success of his Batman TV series-but why it failed was, where the Batman series was played campy, the Green Hornet was played straight. And it just didn't work. I was hoping for some camp when I rented this thing and they did it right-just the right mixture of camp and seriousness. I guess the director (Michael Gondry) did his homework. Kudos!

And it was after the Green Hornet was canceled and Bruce Lee couldn't get any leading roles because he was Asian. That led to him making a historical decision-to return to China and get starring roles in low budget films. His fighting skill, never seen before (or since) propelled him into the legend! He still appears frequently on covers of martial arts magazines. Amazing. Bruce is considered the father of modern martial arts. Do a YouTube search for his 1967 karate tournament video to see how amazing he was!

There was only one fake part about this movie-where the chick goes to dig the bullet out of the Green Hornet. Hollywood-once and for all-a bullet is harmless after it stops moving. Doctors almost NEVER remove them. You do more damage digging them out than it's worth-severing nerves and stuff. But otherwise stupendous.


A. Kaviraj is an artist and writer at Champion City Comics. His works include Dr Death vs The Vampire, Doctor Death vs The Zombie, and The End of Paradise.
- November 15, 2011