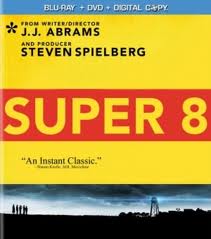 Ok, what do you get when Steven Speilberg and JJ Abrams make a movie? You get Super 8, a cross between The Goonies, ET and Cloverfield. Really well done film-the dialogue is top-notch. Example-the hippie dude who likes one of the kid's sister asks him, "What type of music does your sister like?" The kid replies, "I don't know-who cares? Disco I guess." "I can get back into disco," the guy replies. Funny.

So the movie is about a huge alien who crash landed in the 50's-it's trying to repair its ship, which somehow dissolved into a mass of alien cubes. ET wants to go HOME. The USAF is tracking the thing, which escaped after a train wreck. All the scenes are seat-gripping, and the sub plot of the kids making an amateur zombie movie is great. As an amateur film maker myself, I found it highly interesting.

The acting is also top notch, not a false note anywhere. There's also a romantic sub plot as the geeky kid and the hot chick with the loser father find they like each other. No fake lip locking scenes, just middle school love stuff-really well done.

I'm thinking Hollywood is starting to wise up, as eight out of ten movies I've watched lately have been great. Way to go Hollywood- throwing out the formula writing which doomed Green Lantern. You have my respect again which is not an easy thing to garner.

So the ending is predictable-of course it has to be when you make a movie like this. One false bit was the silent crowd scene at the end-an alien spacecraft is LIFTING OFF in the middle of town and no one says SQUAT. Hollywood really needs to observe some real crowds to realize how loud and how much talking goes on-especially when, like, a SPACESHIP LIFTS OFF!


A. Kaviraj is an artist and writer at Champion City Comics. His works include Dr Death vs The Vampire, Doctor Death vs The Zombie, and The End of Paradise.
- November 26, 2011