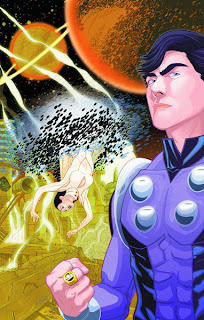 The issue begins with humanity finding a race of people who have been butchered beyond anything their advanced sensibilities can comprehend. They bring in a specialist to investigate; a young man named Braniac 5. Simultaneously, The Security Directorate, which may or may not be made up of psychics (it seems like they’re more pre-cognicent than psychic), watches over a man named R.J. Brande and the three children with amazing abilities that he has with him. The Directorate speaks in a vague, mystical, foreshadowing manner about the kids (who are of course Cosmic Boy, Saturn Girl, and Lightning Lad) and they even confront Brande about it. Meanwhile, Brainiac is making some headway on the butchering case when a mysterious woman comes through a wormhole and warns of some immense danger. The Directorate discuss various issues in regards to this woman, the budding Legion, and in the end we see Cosmic Boy swearing Triplicate Girl into The Legion.

To be completely honest, I paid the $2.99 for the “free” Legion ring that came with the issue. And in a continuing theme of honesty, I regret to say that that’s the only thing in the deal that’s WORTH $2.99. The point of this series is to reveal the previously unknown origin of The Legion of Superheroes. What I GOT was a cluster-suck of three different stories. The opening page sets up the history to that point succinctly and interestingly, after that it’s a free for all of vague statements, no explanation, and general nonsensical confusion. The Directorate seem to have no purpose other than to watch everything, talk about it, and do nothing. In most cases series’ like this are like putting a puzzle together. You get border piece after border piece until you have enough to fill in the center. Legion Secret Origin is DC hurling center pieces at us from the get go, and they don’t all seem to be from the same puzzle. 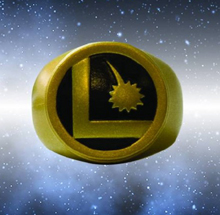 The art isn’t bad, but it’s not stellar, and does nothing to redeem the issue, even though it doesn’t hurt it any either.

Overall I’d say that if you want the ring, then buy the issue and then forget about it. It’s not worth the read.