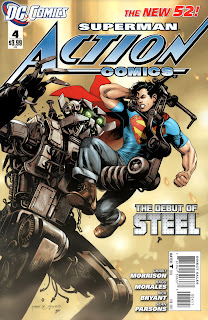 What horrible fate awaits Superman and the city of Metropolis? The true scope of Grant Morrison and Rags Morales' Action Comics run begins to come into view, so get those sunglasses ready, 'cause it is gonna be blinding! And in a backup story that spins out of Action Comics #2, John Henry Irons takes his first steps toward becoming the hero known as Steel!

It's been four months now since the release of the New 52 and I think it's safe to say that while some issues have really broken the molds, other have really lacked in what a majority of the regular fan base has desired. I have found some seriously awesome titles (Animal Man, Green Lantern, Aquaman, Red Lanterns, Superboy, etc.) and read some seriously lacking titles (Stormwatch, Green Arrow, JLA Intl. and Superman regrettably.) But finally, Action Comics #4 is going somewhere. I have enjoyed the art of this series, and have found some clever re-imagining, but as you may have read in earlier reviews, I'm not a fan of the cape, I loathe Lex Luthor's new persona, I have just felt this series was better than the worst, but not really worthy of being on the top of my list. Surprisingly enough this issue changed my mind. While Supes is still wearing his sweater vest cape, his shirt has taken a noticeable turn from blue, to white. I don't know if this is just the coloring style of the colorist, but I like the white shirt much better with the jeans and boots Superman has been wearing.

My god, the cape. I can see the story of how the cape, being kryptonian, may grant Superman some special properties and what not, but there are some serious inconsistencies with why Superman is even using it as a shield against bullets. Back in Action Comics #2 when Superman escapes from the base, he's surrounded by a mob of solders brandishing machine guns that have clips. I emphasize clips because if in the following scene these guns were lasers so there would be no need for the clips.

While this inconsistency drives my comic nerd raging brain in overdrive, I bite my tongue, and continue to read because I know this comic is turning out to be interesting. I am enjoying Braniac. I like how Rags has drawn him up as a caterpillar, and the conclusion of this issue really gives you an “Oh S&^%” exclamation. Finally Superman is being tested, and it's not all cheese and fill. I give this issue my highest rating of all the issues so far because, frankly, it deserves it.

While it has been horrendously slow at getting started, it's finally going somewhere. But before I end this, I wanna touch on the “first” appearance of Steel. John Irons has a nice little back story at the back of the book which kind of confuses me because it gives a solid background to Steel, and a nice look into his new persona. A persona that I feel has been done correctly. He's a super smart guy from a shitty childhood, who seems to be a good version of Lex Luthor. He makes his steel soldier suits, has his own, and can kick some ass in it too. But I would be a liar if I said I loved the suit. Not only does Metallo rip off Apocalypse, but Steel practically rips of Iron Man. Come on Rags, you had a chance to make some serious renovations to these toon's appearance and you went with imitation. Tsk Tsk.