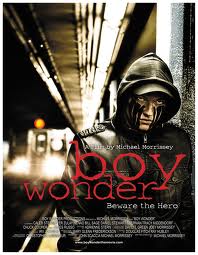 This is a great realistic superhero movie! Sean Donovan sees his mother murdered when he's eight. In a Bruce Wayne moment-this changes his life-he begins training himself physically and mentally to FIGHT CRIME! The movie really starts when he is in high school as the quiet, reserved "A" student, but he's BROODING. He wants PAYBACK.

Twice he walks away from conflict-once when he sees a fellow student bullied by the 'popular kid', and once when an aggressive psycho eyeballs him on the subway. He hasn't experienced Joseph Campbell's 'call to act' yet. The "Hero's Journey" is just beginning. Finally he ACTS. He watches two ghetto rats in the park at night and he stares at them. They come up with the old, "WTF you lookin' at bitch?!" routine and start to beat him up, but he snaps out of it and...bad news for the ghetto rats. This kid is TROUBLED, but he's INTELLIGENT and DETERMINED.

Cut to the tough detective chick, TERESA AMES. She knows Sean because he hangs out at the police station after school. He spends his time researching CRIMINALS. Sean helps detective Ames with some stubborn lug nuts on a flat tire. "You're stronger than you look," she says.

The kid trains in his basement like a young Batman. You feel for this kid-his character pulls you in...you want his suffering to stop. But you also don't, cause you know it's gonna be a good story man. His second mission-an abusive pimp-is AWESOME. Batman strikes again, leaving some business for the undertaker. Just like the original Batman, he KILLS. Charles Bronson would be proud.

The atmosphere of this movie is dark, hyper real....disturbed. As you watch the story unfold you can FEEL the lines of plot tension coalescing like distant headlights from a serial killers car on a lonely country road. (How do you like THAT simile?).

Sean and detective Ames bond, but there's a tense conversation where she tells him that sometimes murderers get away with it if there's not enough evidence. This little tid-bit doesn't sit well with Sean. Like Batman, he wants killers to PAY. The plot unwinds like a precisely made Rolex watch (another simile for ya). The clever way Boy Wonder kills his mother's killer is worthy of Dr Death (Dr Death vs The Vampire & Dr Death vs The Zombie).


A. Kaviraj is an artist and writer at Champion City Comics. His works include Dr Death vs The Vampire, Doctor Death vs The Zombie, and The End of Paradise.
- December 13, 2011