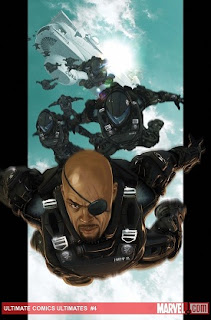 Thor’s miffed and who could blame him? I’d be mad too if some advanced race decided to wax my entire homeland and all of its inhabitants. What occurs is a fierce battle in which the Asgardians had their godly arses handed to them and a battle that turned him from Thunder God to Instant Orphan in about six pages.

That’s the setup for Ultimate Comics Ultimates #4, which mostly spotlights Thor’s suicide mission to take the hammer to those responsible while Fury, Stark and Hawkeye lick their wounds after last issue’s vicious dogfight and monitor from a safe distance. As a whole, it’s continued excellence from Hickman, although I admit there’s some confusion trying to figure out who’s who between the People (debuted in Hawkeye mini-series) and the Children, the techno supers hellbent on reshaping the world to suit their needs. The face-off between the two factions is pretty much inevitable and will probably happen at some point down the road, but for now, Thor wants blood. Trouble is, he’s not going to get it. Why? After a pep talk from Valhalla’s ghosts that got him going, he’s confronted by the leader of the People who reveals his identity, an act that leaves Thor a beaten man despite neither one of them exchanging blows. Yeah, this secret guy’s real lightweight in terms of stature but a heavyweight in all other areas, leaving Thor to skulk back to home base with his proverbial tail between his legs.

With Hickman on point, Ribic’s art simply pops—same as he’s done in the previous issues. The angles are great, environments look alien enough, but this guy’s bread n’ butter is facial expressions: when someone is mad, they look MAD. When it’s hitting the fan, you know it by the look of terror or exasperation or any gamut of emotions the characters go through. I’ll say it now: no disrespect to those that have come before, but his Thor is the best, beard and all. Don’t give me a clean shaven jovial Asgardian god, give me a battle-hardened roughneck that won’t hesitate to ram a hammer up your backside for looking at him cross-eyed. Ribic does that perfectly.

Digging this series very much, but can’t wait till Cap and Hulk make their first appearances.