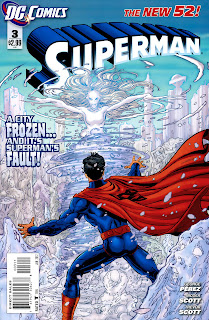 Writer George Perez
Pencils Nicola Scott
Inks Trevor Scott
SPOILER ALERT!?!
The following review is about to dissect this comic book for what it is worth:  Crap. This series is making my stomach twist with an anger I haven't felt since I got to second base with Laura Palmer (Ray Palmer's gym teacher's daughter's cousin-in-law.)  in the middle school gymnasium.  Okay so that wasn’t a bad experience by any means, but this comic should be ashamed of itself.  Not only do we have a narrative about Superman in the first five pages, but it’s a narrative of some non-factor dissing my man Superman.  Is it not enough that this issue has little importance?  Does it matter that I just wanted to get it over with?  What about the price of tea in China?  I find that information much more relevant than the pages contained herein.  Of all the comics the New 52 has put out, how could you do this to Superman?  Money would have been much better spent feeding the hungry, or insuring Bill Clinton’s Playboy subscription got renewed.
This is just terrible.  After five pages of narrative I thought, no I hoped, we would see Lois kick this guy in the nuts, but instead she’s just all ”meh” to the process as George Perez makes his opinion of Fox News perfectly clear in this issue.  Then we get two more pages of this guy talking about Superman!  It does point out that Superman cannot save everyone, and thus does that make him a hero, or a threat?  Sure a lot of baddies get stopped by Ol’ Blue, but a lot of people get hurt, or killed in the process just because they know Superman is there.  The baddies get tougher, create new methods in hopes of taking down Superman, and Metropolis is ground zero for a lot of havoc.  I found this to be the really only important thing in this comic.
As a long time fan, everyone knows what Superman is capable of.  We know he’s virtually indestructible, shoots fire out of his eyes, blows cold air, can fly etc. So why do we focus so much on mediocrity?  The most important aspect at this point is filling in the details of who Clark really is.  How his perception of the world is, and it’s perception of him.  So to this point, it vaguely made the seven page narrative somewhat bearable, but I’m not at all interested in the three beings that are speaking a possible tangent of Kryptonian, and have ties to the elements of nature.  If this turns out to be a Zod incarnation I will stop reading this book, and demand all rabbit legged cats be euthanized, and all short people undergo therapy before they become Guardians of the Universe.
I don’t know what George Perez’s endgame here is.  He is a super awesome writer, and I cannot believe that this is anything my beloved hero Geoff Johns would allow to circulate.  First, Superman fights a guy that’s a Human Torch ripoff, then he fights the Predator, now he fights a gal that has frozen the very bones of everything within her radius, while leaving a few main characters completely untouched. I guess because they were at the eye of this entire debacle.
These enemies are so sub-par for someone with the power held by Superman, I think Bibbo could have easily taken them, and still had time to down a fifth of whiskey to boot!
George.  I think it’s time we had a talk.  You know the one.  The one where I tell you the proper techniques for getting avid fans to not become blood thirsty killers?  This comic made me rage worse than Paul McCartney at a prosthetics factory.  I can’t even rate this issue. It’s embarrassing enough I had to read it.
I’m going to finish this arc, and if Perez continues to be the writer, I’ll probably have to pass on future issues, relegating them to the “just browsing” section of the comic store.  Superman is a foundational fixture of the DC Universe.  Aside from Batman, he is the greatest hero across the board, and this series is worse than Maximum Clonage, and I never thought I would say that.  Give him the intergalactic, super awesome stories that only he is capable of handling.
Bret Kinsey is a contributing writer at Champion City Comics, in his spare time he wears a red towel on his back and leaps over couches in a single bound!
- December 03, 2011