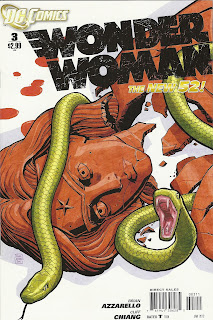 
I know this review is a couple of weeks late, but I feel it is necessary to write something about one of the best titles of the New 52 from DC Comics. As a comic book reader that never gave this title much attention in the past, I am enjoying Wonder Woman by Brian Azzarello and Cliff Chiang. The past three issues have been excellent by blending action with well-paced plot development. There is tension, moments of horror, cool action, evil schemes, and some comedy. Nothing in this series seems forced nor does it get cliched or campy. This is a solid read and missing out is inexcusable.

Cliff Chiang's art has been fantastic and he is one of my favorite artists working on the New 52 titles. His panels are perfect and every issue has a page that leaves you in awe. Not only are the pages great but his artwork for the covers has been impressive as well. However, one needs to give a great deal of credit to Matthew Wilson who does the color for Wonder Woman because his work has made Chiang's panels into works of art.

As far as this issue is concerned, I enjoyed the story regrading the birth of Diana.That's Wonder Woman in case you were wondering. Issue #3 jumped around from story to story, but Azzarello did a nice job of pacing the different storylines. We have angry Amazons, a hurt and confused Diana, and some tension between the pantheon of gods.

The story has come together nicely and Wonder Woman is a great example of what I expected from the New 52. Why? This is a great writer taking a title and turning it into a must purchase comic book. Like Geoff Johns' Aquaman or Scott Snyder's Batman, this has been an excellent read.