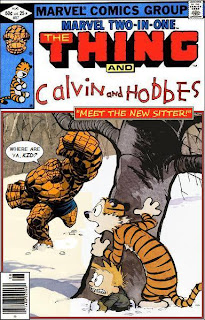 Article by TonyDoug Wright
As comic book readers, we've engaged in countless discussions on various topics that range from what superhero is more powerful ("Who would win in a fight between the Incredible Hulk and Superman?") to what is your fantasy team-up ("Wouldn't it be cool if Spider-Man joined the Justice League?"). The debates can be lively or erupt into a forum war where moderators are left to deal with the causalities. Fortunately, there is a web-site where comic book fans can check out some cool "what if" covers where the superstars and cult figures of the comic book universe come together for some action-packed adventures.

Last year, I discovered Ross Pearsall's website, Super-Team Family: The Lost Issues , where he creates some truly amazing covers for old school comics like Brave and the Bold, Super Team Family, and Marvel-Two-In-One. Ross updates his site daily of team-ups that SHOULD have happened and provides readers with some personal commentary on his choices. Also, Ross listens to the fans and occasionally does requests for those looking for some dream team editions.

Ross was kind enough to answer some questions about his website via email. Thanks, Ross.


Ross, please tell our readers a little bit about yourself.

Not much to say, just a lifelong fan of comic art. 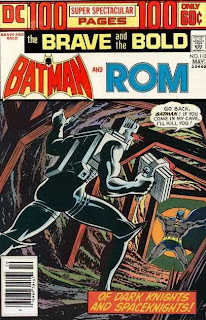 What inspired you to develop The Greatest Team-Ups That Never Happened?

Brave and The Bold was my favorite title growing up and I thought that it was too bad that it was discontinued before they got to some team-ups that I was hoping would happen. I wanted to see Jim Aparo's take on characters like Starman, Martian Manhunter and Captain Marvel. I decided to make a few mock up covers of what those issues might have looked like and it just grew from there. Eventually I had enough covers to start a blog and at the suggestion of a friend, I did.

Have you received any feedback from Marvel and/or DC regrading these covers you've developed?

Not form the companies themselves but I have had nice feedback from many industry professionals. Neil Gaiman. Scot Adams, Todd Nauck, Art Baltazar, Franco and Dave Gibbons have all Tweeted about the blog, Paul Chadwick and Tony Isabella have posted kind comments, and I have read nice words from Jeff Smith, JMS and Walt Simonson. Roger Stern and Erik Larsen have even made requests. It has been very gratifying for me to know that I have given some small amount of pleasure to creators that have entertained me for years. 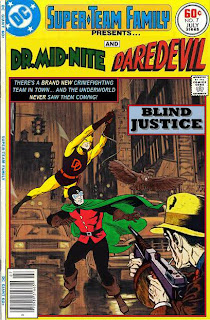 How many covers do you have prepared in advance for your blog? How long does it generally take to complete a cover?

I am almost a year ahead of what I post on the blog. Covers usually take 5-6 hours to complete.


What cover has had the most positive feedback from your readers? Have any of your covers caused controversy among your readers?

Thing/Death and Thing/Bone have had the most hits, due to being tweeted about by their creators. My recent set of "Retro" Brave and the Bold covers seemed to be popular with a lot of folks. The hasn't been any controversy yet, thank goodness. 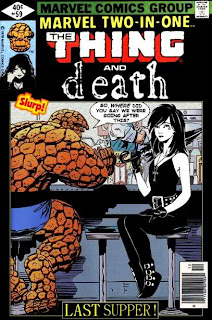 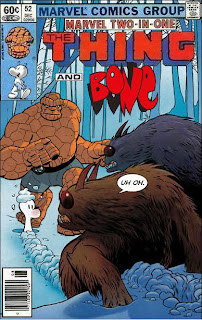 Are any characters "off limits" or do you consider them all fair game?

Anyone is fair game as long as there is appropriate art to use and I know enough about the characters to make a scene work.

Email ThisBlogThis!Share to TwitterShare to FacebookShare to Pinterest
Labels: Bone, marvel two in one, ROM Spaceknight, the brave and the bold, The Thing