AN INTERVIEW WITH LUKE FOSTER

Every Thursday, Champion City Comics will interview someone involved in the world of webcomics so you can learn more about the creators of your favorite webcomics or know more about some up-and-coming webcomic creators.

This week, we have an interview with Luke Foster, the creator of Moon Freight 3, a sci-fi comedy that is updated ever Monday, Wednesday, and Friday. Moon Freight 3 (MF3) follows the exploits of Larry Forrest, the cargo inspector on Moon Freight 3. Larry's companion is a robot named Bolts and the two characters do their best to survive their mundane jobs in space while working for a talking rat and dealing with psychotic co-worker space pilots.

I started reading MF3 last month and was impressed that this series has been running strong since August 2008. Foster's style can be described as minimalist, but when you start reading Moon Freight 3, you will see that it works well for the story. Over the past four years, Foster has been able to keep the stories fresh and he doesn't seem to be losing any steam with his webcomic. 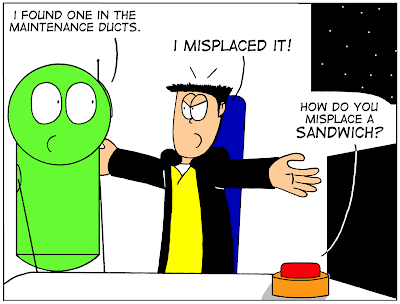 Luke was a good sport and answered some questions via email. Thanks for the interview, Luke!

The biggest influence would probably have to be the BBC sci-fi comedy Red Dwarf. I was watching the extras on one of the DVDs a few years ago, and show co-creator Doug Naylor was talking about how, when making a sci-fi comedy, it was important to always make sure the comedy came before the science fiction. For some reason, that line really struck a chord with me. I also liked how the cast of Red Dwarf were, unlike the characters in most science fiction, not the absolute best at their jobs, or the greatest heroes in space, or the like. However, when creating Moon Freight 3, I didn't want to go to the Red Dwarf extreme of making my characters the absolute worst at their jobs, either, as funny as that was. Instead, I decided to make my characters, especially Larry, a perfectly average guy, like any one of us, stuck in a job we don't necessarily like. Battlestar Galactica was another influence, in that the science fiction was a setting for the story rather than it's genre. BSG was, at its heart, a war drama that just happened to take place in space. The science fiction trappings were just part of the characters' lives, and I wanted the characters in MF3 to have a similar lack of acknowledgment of what to us is science fiction, but to them is commonplace.

Your webcomic started off as a black and white comic with a minimalist approach. Did you face any criticisms from the webcomics community for your style?

I did face some, but only when I asked for critiques, mainly telling me to do things like add backgrounds and more shading. I added color at the one-year anniversary, but it was originally supposed to be just for that week, as a celebratory thing. However, I received so many positive comments about the addition of color that I kept it that way going forward. I know I have a long way to go to even come close to being as good as a number of artists I respect, though, so I'm still putting in the practice. Hopefully it's working.

What sites have you used to promote Moon Freight 3?

I use Twitter, Facebook, and a Livejournal community on a regular basis. I have also done Project Wonderful advertising on other comics, and I've posted on forums. I also use podcasts on an irregular basis, usually when a new book collection comes out, and I am very lucky to have such strong support in those communities.

What webcomics do you read on a regular basis? 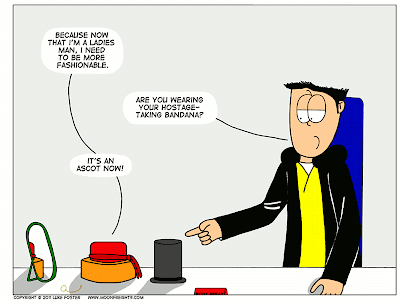 MF3 is a character-driven workplace comedy set in space, and I can't think of many others that fit that description. I also intentionally set out to avoid many of the usual science fiction tropes, which is why there are no aliens, no faster-than-light travel, humanity hasn't left our solar system yet, robots don't struggle with the concept of humanity and instead are just happy being robots, etc. Hopefully I've succeeded in keeping those differences alive. I've also tried to create a diverse cast of characters that includes spacemen who hate their jobs, formerly mentally-ill ex-con robots, perpetually cheerful physics students, talking rats, and shady robot doctors. You know, a little something for everyone.