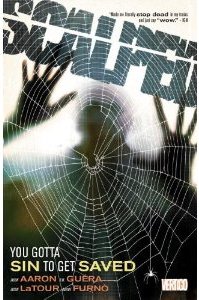 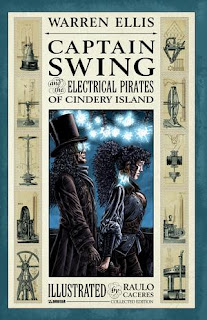 A trip through the aisles of my local hip library system, the one in which one branch in particular is helmed by comic-loving folk like me, landed me a freshly minted copy of Avatar’s Captain Swing & The Electrical Pirates of Cindery Island and the latest (and perhaps the last) trade of DC-Vertigo’s Scalped.

This here serves as your official review, or rather why you should purchase each of these two books with your hard-earned pay/ allowance/court settlement pay-out.

Right off the bat let me admit my fandom of Captain writer Warren Ellis: of all the 80s Brit icon comics writers, he’s my top dog. I may joke that I look like Morrison, and I’m game for some Gaiman, but Warren, all 7 foot-9 inches of him, is my guy: I picture him in some dank pub, double-fisting shots of Beefeater as he pours his cantankerous spirit all over the pages of Captain, a soft-cover collection of the mini-series of the same name. Not quite steam-punk, we’re in late 19th Century London where in real life the city was plagued by a mysterious figure known in the papers as “Spring-Heeled Jack,” who reportedly really could leap moderate sized buildings and walls in a single bound. Ellis expounds on the Jack mythos and explains the goings-on through the eyes of a local constable and a narrative from the captain himself. The story: the cop swears justice when he discovers Jack may be responsible for a series of unsolved murders; instead, the good chap finds himself thrust in the middle of a human-wide revolution that stands to change the way the powers-that-be conduct their nasty business of oppression. There’s an Illustrated Classics-type feel thanks to artist Raulo Caceres and it works in the context of the story. Worth the time and money, I say.

Marvel big gun, Jason Aaron, sets to wrap on his crime opera set on the modern Native American “Prairie Rose” reservation. It’s gritty, it’s dark—it’s more of the same from Aaron, who I figure wants to end his run so he can concentrate on the House of M’s heavy workload. I can’t give too much away since, if you’ve been following, you know there’s plenty at stake with Dash’s conflict with the Feds with who he’s in cahoots and Red Crow’s problems with encroaching crime lords but suffice to say if this type of tale suits your taste you’ll walk away with a mouthful. Buy this, too.


Brian Cee is a contributing writer at Champion City Comics