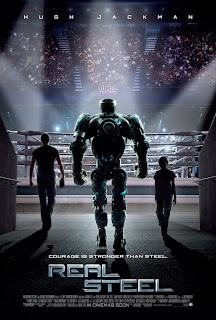 No spoiler alert here: nothing to spoil.

Ok, it's young Anakin Skywalker again-the 10 year old kid who somehow knows all about working on robots and stuff. They even cast a little dude that looks like Anakin. Did they think we wouldn't notice? Or, were they hoping we would?

Ok, it's the future where humans don't fight anymore because it's not violent enough. The definition of violence is in question here, I must admit. I personally think it's more violent if a human gets a tooth punched out than if a robot gets its head knocked off. But what do I know?

So Wolverine, I mean Hugh Jackman, stars as the loser dude who keeps buying robots and keeps seeing them turned into scrap. He's always broke but he always comes up with money for more robots. It's like Road Warrior, where gas is supposed to be precious, but everyone speeds around 24/7 in their souped up vehicles. Duh. Whatever.

So the kid finds a robot at the bottom of a thousand foot drop culvert at a robot wrecking yard. He somehow manages to lug the 1000 pound item up the thousand feet of stairs-some lame mention is made of using a 'winch'. I'm thinking if it's not a thousand foot winch it's pretty much useless. But this is Anakin Skywalker we're talking about here so he gets it DONE.

The writers also couldn't resist the cliche of the kid who has never seen his dad and is stuck with him and they bond, along with the bonus cliche of the ex-flame who has given up on loser but the love gets re kindled. I'm not at that part of the movie yet but I can see it coming, man. Kudos to the writers for sticking to the formulas-we wouldn't want to confuse the audience with an actual original story now, would we?

The economics of robot fighting are somewhat also in question-you can show up for a fight and any dude will give you $1000 if your robot wins and keeps the parts if he loses. Keep in mind this robot was THROWN AWAY, like all the other robots in the robot boneyard. I'll let you figure out the contradiction here-no need for me to spell out everything. Fuzzy math? This is more like long-haired hippie math. This is CHIA Pet math, man.

This is a real sigh-inspiring 'film'. You know, the sigh you give off when you see something lame. As in "~sigh~ - gimme a break." OK, I started this review at the part where robot dude won his first fight. I'm going back in. Keep ya posted. ~Sigh~

Criminy. I'm back almost immediately to report a dumb Transformer break dancing robot rip-off scene. Pass out some more kudos, idiots. I really hate screenwriters, as a general rule. Even more than politicians, possibly. So the kid comes up with the RADICAL idea to teach the robot how to box. Of course Wolverine is an ex-boxer. Didn't see that coming, did we? The fact that no one else ever thought of this leads me to believe that in this future, toxic gases have dramatically lowered the human IQ. Sad, really. I wish I could breath a few whiffs so I get dumb enough to enjoy this movie. I'm certain the screenwriters have been huffing the stuff like crazy. Ease up, guys. Save some for the screenwriters of
Battlefield Earth. They are currently smarter than you. ZING!

PS Wolverine: do you have to be a one-note actor? Every character you play is EXACTLY THE SAME. Put on some black Ex-Men clothes, dufus. His idea of a different character is getting a shave and a haircut. ZING! Don't mess with me.

There's also plenty of dumb scenes like a 1000 pound robot sitting on a tailgate and not only doesn't the tailgate snap, it doesn't even flex. The robots appear to actually weigh about 5 ounces from the way they gravitationally interact with their surroundings. ZING! PS the robot's name is 'Atom'. DC comics should sue.

Then we have the touching scene where Rocky I mean Atom stares at himself in a mirror wondering, "What's it all about, Alfie?". Nice touch, screenwriters. Man what a touch of genius-we'll anthropomorphize the robot. Yeah, THAT'S never been done before, dillrods. You might be thinking 'Kav-what's with all the harshness? You seem genuinely angry at this film.' Ok yeah, I AM. Maybe you like having your intelligence insulted but I find it rather offensive. Say something about my mama, that won't make me as mad. Say my mama so hairy her armpits look like she got Don King in a headlock or something. This robot staring in a mirror is PISSING ME OFF!

Just so I'm not perceived as entirely negative, I will say something nice about this movie: the two-headed robot was pretty cool. Why are the behind the scenes film guys-the designers, set builders, etc always so good when the writers are so bad? What's that all about, anyway? As an artist I imagine I would feel the same way illustrating a comic that had really sucky writing: unfulfilled.

So Wolverine gets beat to a pulp by the guys he stiffed at the beginning of the movie. But don't worry-remember Wolverine heals fast and he's just fine and dandy the next day. Kudos! Then we have the touching but predictable scene where Wolverine loses his kid to the legal guardian. Man gets kid, man loses kid, man gets kid back-you know the drill.

The movie draws to its inevitable conclusion-Rocky I mean Atom has a bout with the Russian fighter I mean Russian robot 'Zeus' who is of course undefeated. Would it be a spoiler if I told you who wins after being on the ropes or are you smart enough to figure it out for yourself?

I'm giving this movie 2 stars. Not 5 for obvious reasons, not zero because at least it was somewhat fun to watch.