Kav & Tony Break it Down is nothing more than two long-time comic book readers making fun of the Golden and Silver Age Superman comics. We understand that these books were written for a juvenile audience but we could not resist reviewing these classics. Please note that no comic books were hurt during the review.
Tuesday means it's time for Kav and Tony to break down your favorite Superman comic books. This week, we continue a review of Superman #194 'The Death of Lois Lane'. This was published in 1967 and the writer was Otto Binder, pencils were done by Curt Swan, and the inker was George Klein. Did you miss part one of this review? Click here to read. 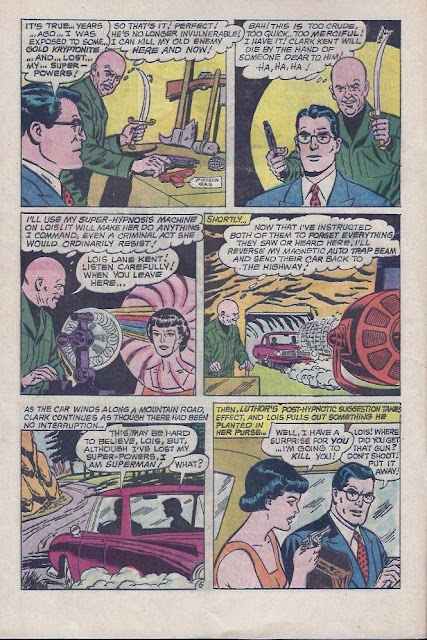 KAV: Check out Luthor's weapons lying around-an AXE, a SLEDGE, and a gun with a 'poison gas' label on it in case short bus Luthor forgets what it's for. So Betty and Barney Hill are released with their 'missing time'.

TONY: Luthor has the opportunity to kill Clark but decides that it would be easier to hypnotize Lois than to do the deed on his own. Totally lame, bro. I love Clark's reaction to Lois pulling a gun out of her purse. He's about to get shot but acts like Lois is threatening him with a hairbrush. 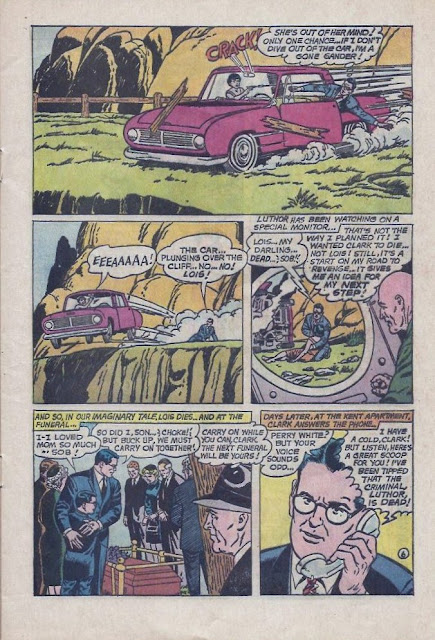 KAV: Check out the funeral scene in panel 4-it amazes me that no one says to Luthor, who is standing BY a tree "Hey it's that asshole Lex Luthor-maybe he had something to do with this-GET HIM!" PS don't ask me why Stupidman didn't make himself a signal watch so he could call his superson whenever the car went off a cliff...that's above my pay grade.

TONY: Clark the idiot decided to jump out of the car so he would not get shot. If Clark had a brain, he could have grabbed the gun from Lois, gave her a pimp slap, and everything would have been cool. But the big dope jumps out of the car without realizing that the car was about to go off of a cliff Thelma and Louise style. Way to go, you big hero. 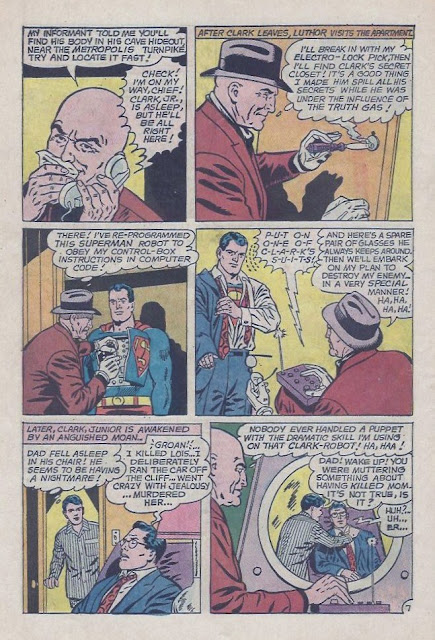 KAV: Apparently any idiot can prank call any Planet reporter and send him on wild goose chases just by covering their voice with a hankie. By now you think a SEASONED reporter would be savvy enough to call his boss and confirm that was him who called even though it sounded like Luthor. Also apparently Superman robots will just stand there and let themselves be programmed for evil. Great quality control, Stupie.

TONY: I had a headache yesterday and it returned after reading that last page. 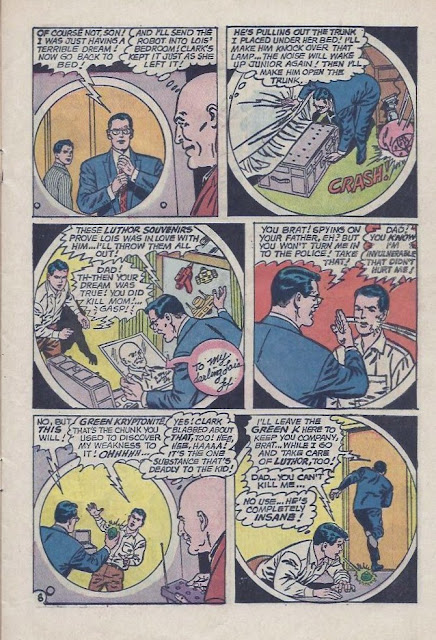 KAV: The story takes a wacky I Love Lucy turn here, getting more hare-brained by the moment. The part that struck me most, however, was how Stupidman JR was unable, with all his heightened senses, including that of touch, to determine that he had been slapped by a metal robot rather than an organic hand. Dumbass.

TONY:  Robot Superman decides to use the pimp hand! However, it does not work the superkid. Luthor continues to amaze me with his lack of aggressiveness. He plants a trunk full of phony love letters and junk to show superkid that his mom was in love with Luthor and therefore his dad was justified in killing his mom. Wow, that's really stupid. You know what you could have planted, dimwit? A bomb. Epic fail for Luthor.

That's all we can take for today. Join us next week as we finish this god-awful tale.

TonyDoug Wright is the owner and editor of Champion City Comics. His webcomics include Dr Death vs The Zombie, The End of Paradise, and Day 165.
- February 07, 2012