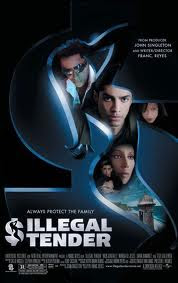 Should have known-it was done by the guys who brought us the ridiculous 'Hustle and Flow' about the hooker who becomes a pop star.

I can't even talk much about this movie-it damaged me so bad-but I will say they try SO DAMN HARD to be noir-but it all falls so flat. Some lady and her son, Wilson, are evading the people who killed her husband, Wilson's father. It seems like half the lady's lines are her yelling, 'WILSON!". Lame

Sigh-at the end they go and go to the bad guy's mansion and just shoot him. Why she didn't just do this instead of running for TWENTY YEARS is a mystery. Also there's this ridiculous scene where the bad guys come to kill WILSON and his girlfriend, who are hiding in the basement. Chick keeps screaming, "WILSON! WHY ARE THEY HERE? WHY ARE THEY SHOOTING AT US?!!!" Remember they are HIDING. Screaming and hiding don't go together numbnuts screenwriters. God it's stupid. DO NOT watch this movie! It will damage you, man.

Oh yeah, WILSON-who had never shot a gun before goes out target shooting for about 5 minutes and after that he can completely outshoot thugs who have been shooting all their lives. DUMB! DUMB! DUMB! Also the actor who plays WILSON is really annoying-you actually root for him and his mom to get shot so she'll stop yelling "WILSON!"