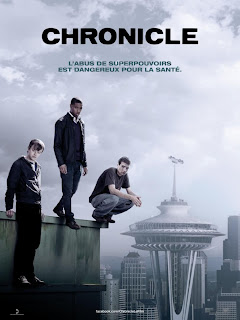 Ok this film starts out with the school geek, Andrew Detmar, who, like Peter Parker, gets picked on by everybody. As if this wasn't nerdy enough, he decides to buy a camera and start videoing everything: school, thugs, parties-which of course ensures he gets pummeled even more frequently. At a party, as he is wiping beer someone splashed on his camera off, he is approached by Steve, a good-natured black kid, who found a 'thing' in the woods which he wants Andy to film.

The 'thing' is a deep hole in the ground from which emanate strange sounds. the pacing, acting and scenes are great. High early hopes for this film. At the hole waits his cousin and non-protector, Matt.

Andy shows little interest in this amazing hole, which is strange for a guy who is going around videotaping stuff. The hole is a big cavern, in which is a giant glowing alien crystal. The crystal bestows telekinetic powers and bloody noses. Everything is 'chronicled' by Andy, Cloverfield style. Instead of finding the powers amazing, the three find them hilarious, throwing a baseball at each others noggins as they try to telekinetically stop it. What is the human fascination with super powers, I wonder? It goes back to the Greek Gods and even further. The first story ever written, Beowulf, was about a superhero and a weird super-villainous powered creature, Grendel. The archetype seems built into our DNA. I gotta think there's a reason for this. That someday, actual superheroes will exist. Ok don't call the funny farm-I'm just speculating here.

Andy's home life isn't so great-his mom is dying and his dad is an ass-sack.

So they become bullies, pulling cruel pranks on people with their powers. Till it gets real when they almost kill an ass-wipe tailgater by sending him careening into the river. This is the plot point one, which usually comes at the end of the first third of a film. Like when Peter Parker realizes after his uncle dies that with great power comes great responsibility.

After they've had the powers for about a month they finally try flying. This would have been the first thing I tried, personally. there's a fake part where they hear a plane as they are flying then it almost hits them. Since a plane travels faster than sound, the plane should have reached them before they heard it, but it's a small error. A large error is that they are flying in the clouds, which the temp and lack of oxygen would kill them. Airplane cabins are pressurized for a reason, dog.

The scenes run long, no conflict being established. I'm over halfway through the movie and NOTHING HAS HAPPENED YET. This is a bit larger error in writing. The movie starts to drag. Screenwriters take note: MAKE SOMETHING HAPPEN! FAST! Especially if you're writing about people with TELEKINETIC POWERS. PS the scene where Andrew sploogies or vomits (it's unclear which it is) all over himself in the bedroom with the chick is just plain stupid. At least use realistic looking sploogie, guys (if that's what it was). Not green colored slime. Criminy.

The protagonist, Andrew is poorly written. He's a whiny little dweeb, with none of the characteristics of Joseph Campbell's 'Hero's Journey'. He starts to turn evil and in one whiny moment kills his buddy Steve. I'm not feeling this movie, man, and time is running short to redeem the plot. I'm three fourths of the way through the freakin movie. Something better happen quick or I warn you guys-you're getting a negative star rating from KAV'S DVD REVIEWS. I know you don't want that. That's the kiss of death for Hollywood. Or the Kiss of the Spider Woman, or something.

The movie finishes with an out of control Andrew battling Matt through the airspace of the city-trailed by police choppers. The fight scenes are some of the most realistic superhero aerial fight scenes ever-too bad they were wasted on a weak plot. Matt flies off to Tibet to live in peace or whatever. Weak, man. Two stars for this one, a movie that never got off the ground, even though the characters did.