KAV'S DVD REVIEW OF THE GREY 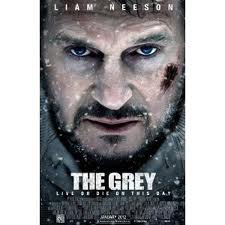 Ok so it's the guys who survived a plane crash trying to survive against wolf attack. Now, this should have been NO PROBLEM WHATSOEVER if they just armed themselves with jagged shards of the plane, stayed in the fuselage and picked the wolves off as they came in but NO! Instead their plan is to arm themselves with NOTHING and traipse off into the wilderness where of course they get picked off one by one. Then they make a line and go over a cliff to some trees. Unfortunately these are apparently flying wolves, as they are waiting for them at the bottom. We are also treated to the great realistic depiction of them being in the frozen wilderness but their breath is not fogged! Why is this so difficult for Hollywood to compute? It's obviously a sound stage they're on.

Then the two guys left fall in the supposedly frozen water and one guy gets his foot stuck against the current. Continuity guy should be shot in this one too as we see his foot is on the WRONG SIDE OF THE CURRENT! Duh, guys.

Of course when Liam Neeson hauls his ass out of the supposedly freezing water he's not even shivering AND he experiences the instant dry clothes syndrome! I'm not s*****g you! they did it! I see this a lot in movies  like True Grit where the second the chick gets out of the river she is stone dry. Why is this so hard for Hollywood to compute? These things kill a story, guys-didn't anyone tell you?

So Liam makes an appeal to God when he's the sole survivor. God must be thinking 'Hey-I gave you lots of razor sharp shards and a fuselage-plus I dried your clothes instantly-what more do you want from me, dude? OK I'm sorry about the flying wolves but I figured you had that coming. Shoulda stayed in the fuselage, sucker'. Oh yeah-I forgot to mention no matter how many times the flying wolves suddenly appear like in a horror movie, these guys still pay the minimum attention to their surroundings, instead focusing on joking and bickering. Wake up dudes! You're surrounded by vicious flying wolves!!! Snap out of it! Hollywood: audiences find it hard to root for idiots. Make a note.

Then dumbass spends a bunch of time going through the touching pictures in all the dead men's wallets. Hey moron-why are you dicking around with those pics when there are FLYING WOLVES stalking you? If the protagonist doesn't take his situation seriously, WTF are we supposed to? Hollywood: you're brain dead- we're not! Can someone from Hollywood PLEASE hire me as a reality screen for your movies? I promise 100% Oscar winners for every one if you'll just LISTEN TO ME! I'll work for free-it'll be a public service! Ok ignore me then and keep cranking out stinkers. See if I care. Go make Wet Hot American Summer 2 then. What do I know? I do know that I could make a far better movie with my I-phone. PS-enough with dude pulling out the note he wrote to his ex-WE GET IT! No need to hammer us over the head with this every 5 minutes. Criminy. Instead of me paying $2 to watch this movie they should have paid me One thousand billion dollars to watch 4 minutes of it. That would have been fair. Ok I would still have been cheated but I could live with it. Maybe.

So of course as idiot sits looking at the wallet pix OF COURSE the flying wolves sneak up on him. Didn't see that coming-oh no I didn't. I wish Vegas had some betting pool where you try to guess what happens in a movie and you can bet on your predictions-because in that case I would be the Fats Domino of Vegas. Vegas would be my b***h! Oh yeah-by the way, I'm kinda wondering WHY the wolves are even stalking him as they've had about 50 people to eat so far. What are they, Marvel Zombies or something? Come on, work with me here. If these flying wolves need to eat that much they should be extinct by now. There's dumb, there's dumber, there's dumbest, and then there's HOLLYWOOD. And these are the pinheads who are always telling us how to VOTE? I don't think so. See, I'M the smart one. YOU'RE the dumb ones. Dumb ones don't tell smart ones how to vote. Now make sure your helmets are strapped on guys. Kav-why all the anger? Watch this movie for an answer. If you don't feel like waterboarding some producers and directors after that then we'll talk.

Then it's the showdown with 'The Grey' who is actually BLACK. That's right-they couldn't even get the color right. Now do you believe me that this movie sucks? I kinda wish someone WAS stabbing me in the eye now-so I couldn't watch this crappy ridiculous film. Liam Neeson you should be embarrassed, VERY embarrassed. Go commiserate with John Travolta about living down a truly sucky movie-in his case the infamous Battlefield Earth. In your case The Grey (Black).

So instead of attacking, the flying wolves give him time to prepare-taping airplane mini liquor bottles to his knuckles (I'm not s******g you). PS the wolves are obvious animatronics-the Pirates of the Caribbean at Disneyland look more realistic. AAAAR! So we have animatronic black not grey flying wolves-do I about have it right? I'm glad I didn't see this at a theater cause I would have been kicked out for sure for jeering at the movie and throwing milk duds at the screen. Hey-duds for a dud I figure. What's the problem, officer? Then THE WORST ENDING OF ANY MOVIE-PERIOD. Dudes recites a lame poem...faces THE GREY (BLACK) aaaaaaaaaaaand it's over. No I am not s*****g you. That's the end. I am super pissed man. So I have to give this crap-fest negative one hundred billion two hundred gazillion three hundred and fifty-two bazillion stars-and that's being generous. The only good thing I can say about this movie is that no one was stabbing me in the eye as I watched it. I can't think of anything else.
- June 28, 2012