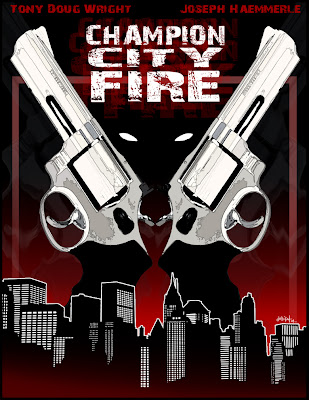 Our third anniversary at Champion City Comics is approaching, so I've decided to share with our readers the story behind our webcomics. This will be a weekly segment where I review a page or set of pages from our body of work, so we hope you enjoy Webcomicography. Our first selection is the comic book project that launched this site, The Champion City Fire. I (TonyDoug Wright) was the writer and the pencils, inks, lettering, and color was done by Joe Haemmerle.

When I started my first comic book project, I wanted to write a crime noir tale that blended everything I loved about Batman and 100 Bullets. Phase one was underway. Rough drafts were developed, scrapped, more rough drafts were written, scrapped, and within a year of starting my project, I had a script for a crime noir tale titled The Champion City Fire where time traveling vigilantes went back in time to kill the worst of the worst criminals in New Ravenwood, Ohio to obtain a harmonious future. The story was going to be seen through the eyes of the time travelers, the cops that investigated their murders, and the criminals that were being targeted.

Phase two of the project was landing an artist who could do pencils, inks, color, and lettering. Those all-in-one artists are hard to find, but fortunately I had a talented comic book artist in my family. Joe Haemmerle is my cousin and I approached him sometime during the summer or fall of 2004 to join me on a comic book project. He was game and I was very pleased. Once the script was developed, I sent it to Joe to get started.

Feeling great about my script for The Champion City Fire, I emailed a copy to a guy I knew who wrote and produced independent comics. As I awaited his response of, "Oh my God! This is amazing!", I was given the "This sucks" response in an oh-so-diplomatically-worded email.

The wind was knocked out of my sails for a moment, but I decided to revise the script for The Champion City Fire one last time. As I emailed the revision to the guy I knew in the comics business, I hoped for some good news. Fortunately, he liked the revision and told me I had something good with my story. That was the stamp of approval I needed to move forward.

Issue one of The Champion City Fire introduces the time traveling vigilantes and the cops who investigate the murders of the criminals they kill. The story was to have two rival time traveling groups: The Travelers, a vigilante group that takes out some of the worst criminals but spares a few, and The Disruptors, a group that will take out all criminal elements.

Let's examine the first page of this project for today's post.

Page one introduced a disruptor named Donovan Page, who was assigned the task of killing Denny O'Shea, a violent criminal with a lengthy record. O'Shea had been spared by The Travelers, but The Disruptors wanted to make a big statement by killing O'Shea. Let's examine the progress of page one.

Below is the original first page with the original script. Donovan Page and Denny O'Shea are introduced and the reader is given some background information on O'Shea. The narrator on the first page is a recording that a Disrutpor gave to Donovan Page before he was sent back in time. The narrator would give a description about O'Shea's past where he was a famed football player, but his love of women and gambling led to his demise.

The problem with the first page above script-wise is that it is an avalanche of words and information thrown at the reader, which is too much to digest from the start. My friend in the comic business told me to change this page and make it more of an attention grabber. I decided to fix the problem by trimming down the verbiage, but I needed a way to grab the attention of the reader.

I decided that if the Travelers and Disruptors were from the future then perhaps I could create a special type of slang for these people to use like the characters in A Clockwork Orange. Since this was a noir story then the time travelers would use a type of slang that was rooted in the hardboiled detective stories. The revised page one below shows the changes made to the script.

The dialogue has been trimmed down and the hardboiled style of language gives The Champion City Fire something different in the way of dialogue. It catches the reader's attention and is not as long-winded as the first draft. Joe and I were happy with the changes, but Joe thought that the art should be changed as well. In Joe's opinion, he wanted to up his artistic style and use a color scheme of black, grey, and red to give our noir tale a grittier vision. I told Joe I trusted his thoughts on changes and the page below is the end result.


This page is much better in style because it shows Donovan Page lurking in the shadows and panel three introduces Denny O'Shea. Page was not shown in the original first page, but was referenced in name only. The black and grey color works very well and this is the style I wanted for our story. The first page has been successfully completed.

Want to read The Champion City Fire? The comic is embedded below, but click on FULLSCREEN for optimal viewing.

TonyDoug Wright is the owner and editor of Champion City Comics. His webcomics include Dr Death vs The Zombie, The End of Paradise, and Day 165.
- June 08, 2012